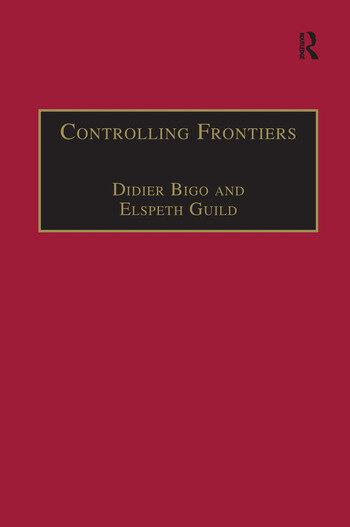 Controlling Frontiers: Free Movement Into and Within Europe

Focusing in particular on the European borders, this volume brings together an interdisciplinary group of academics to consider questions of immigration and the free movement of people, linking control within the state to the role of the police and internal security. The contributors all take as the point of departure the significance of European governmentality within the Foucauldian meaning as opposed to the European governance perspective which is already well represented in the literature. They discuss the relation between control of borders, introduction of biometrics and freedom. The book makes available in English an analysis of an important and politically highly charged field from a major French critical perspective. It draws on different disciplines including law, politics, international relations and philosophy.

Contents: Introduction: policing in the name of freedom, Didier Bigo and Elspeth Guild; The legal framework: who is entitled to move?, Elspeth Guild; Frontier controls in the European Union: who is in control?, Didier Bigo; Who is entitled to work and who is in charge? Understanding the legal framework of European labour migration, Elspeth Guild; Where does the State actually start? The contemporary governance of work and migration, John Crowley; Looking at migrants as enemies, Anastassia Tsoukala; The control of the enemy within? Police intelligence in the French suburbs (banlieues) and its relevance for globalization, Laurent Bonelli; Policing by dossier: identification and surveillance in an era of uncertainty and fear, Ayse Ceyhan; Policing at a distance: Schengen visa policies, Didier Bigo and Elspeth Guild; Bibliography; Index.

Didier Bigo is Professor of International Relations in Sciences-Po, Paris and Visiting Professor in the Department of War Studies at King's College London. Didier Bigo is also Scientific Coordinator of the 6PCRD of the EU Commission Challenge, Editor of the forthcoming ISA journal International Political Sociology and Editor of the French journal Cultures et Conflits. Elspeth Guild is Professor of European Immigration Law in Nijmegen, in The Netherlands. She is also Visiting Professor at the L.S.E London and at Sciences-Po Paris, and Partner of Kingsley Napley, JHA supervisor for CEPS.

’This volume is as extraordinary in quality as its subject is in importance. The editors and contributors successfully penetrate the fog of sensationalism, expediency and superficial official and media discourses on societal security and the presence of foreigners in Europe...This is an indispensable work for all concerned with the glib and often pernicious securitization of migration and with the palpable tensions between security discourses and civil liberties and human rights in Europe.’ Martin O. Heisler, University of Maryland, USA ’...an important contribution to the growing literature exploring how the project of European unification is re-shaping the landscape of movement control as it re-shapes Europe itself. Valuable reading for the specialist and non-specialist alike.’ John Torpey, City University of New York Graduate Center, USA 'This book is multi-disciplinary, as it contains contributions from law, politics and international relations scholars...[it is] a very stimulating book which will attract the interest of a large audience. It contributes to a wide range of intellectual debates, notably on free movement, migration, deterritorialization, the control of frontiers, globalization, inequalities exclusion and domination.' Journal of Common Market Studies

Controlling Frontiers: Free Movement Into and Within Europe