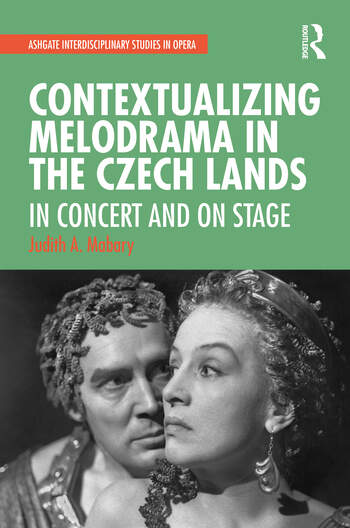 Contextualizing Melodrama in the Czech Lands: In Concert and on Stage

The mention of the term melodrama is likely to evoke a response from laymen and musicians alike that betrays an acquaintance only with the popular form of the genre and its greatly heightened drama, exaggerated often to the point of the ridiculous. Few are aware that there exists a type of melodrama that contains in its smaller forms the beauty of the sung ballad and in the larger-scale works, the appeal of the spoken play. This category of melodrama is one that surfaced in many cultures but was perhaps never so enthusiastically cultivated as in the Czech lands. The melodrama varied greatly at the hands of its Czech advocates. While the works of Fibich and his contemporary Josef Bohuslav Foerster, a composer best known for his songs, remained closely bound to the text, those of conductor/composer Otakar Ostrčil reveal a stance that privileged the music and, given their creator’s orchestral experience, are more reminiscent of the symphonic poem. Fibich in his staged works and and Josef Suk, composer/violinist and Dvořák’s son-in-law, in his incidental music reflect variously late nineteenth-century Romanticism, the influence of Wagner, and early manifestations of Impressionism. In its more recent guise, the principles of the staged melodrama reside quite comfortably in the film score. Judith Mabary’s important volume will be of interest not only to musicologists, but those working in Central and East European Studies, Voice Studies, European Theatre and those studying music and nationalism.

5. From Paris and the Boulevard du Crime to Prague’s Estates Theatre: Tracing the Popular Melodrama
a. The Early History
b. The Characters and Plots through Pixérécourt’s Le Chien de Montargis
c. Animals and Actors in Popular Theatre
i. The Dog
ii. The Actors
iii. The Other Animals
d. Character Evolution in the Popular Melodrama: Drei Tage aus dem Leben eines Spielers and Yelva, oder die Stumme
i. Characters, Plots, and Performers
ii. The Music

6. Zdeněk Fibich and the Revitalization of the Classical Melodrama
a. Personal Intersections and Progressive Trends: Collaborator Jaroslav Vrchlický and the Lumírovci
b. The Making of the Concert Melodrama

8. Fibich’s Hippodamie: Melodrama for the Dramatic Stage
a. Accepting the Challenge and Making History
b. Hippodamie through the Text and Music

Judith Mabary is associate professor of musicology at the University of Missouri in Columbia. Her research interests center on Czech music of the nineteenth and early twentieth centuries, namely the life and works of Antonín Dvořák, Zdeňek Fibich, Bohuslav Martinů, and Vítězslava Kaprálová, as well as the genre of Czech melodrama.

Contextualizing Melodrama in the Czech Lands: In Concert and on Stage