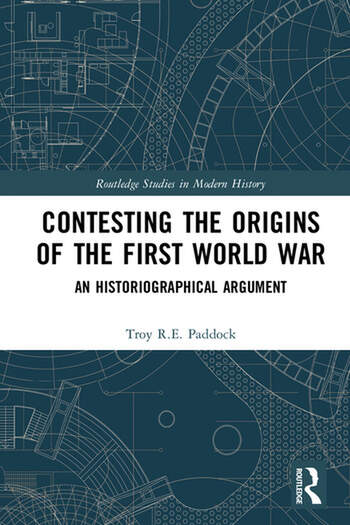 Contesting the Origins of the First World War: An Historiographical Argument

Contesting the Origins of the First World War challenges the Anglophone emphasis on Germany as bearing the primary responsibility in causing the conflict and instead builds upon new perspectives to reconsider the roles of the other Great Powers.

Using the work of Terrance Zuber, Sean McMeekin, and Stefan Schmidt as building blocks, this book reassesses the origins of the First World War and offers an explanation as to why this reassessment did not come about earlier. Troy R.E. Paddock argues that historians need to redraw the historiographical map that has charted the origins of the war. His analysis creates a more balanced view of German actions by also noting the actions and inaction of other nations. Recent works about the roles of the five Great Powers involved in the events leading up to the war are considered, and Paddock concludes that Germany does not bear the primary responsibility.

This book provides a unique historiographical analysis of key texts published on the origins of the First World War, and its narrative encourages students to engage with and challenge historical perspectives.

Chapter 2 Great Britain: an entente frame of mind…but nothing in writing

Chapter 3 Austria-Hungary: the Habsburgs and the failed third Balkan war

Troy R.E. Paddock is a professor of European history at Southern Connecticut State University. He wrote Creating the Russian Peril: Education, the Public Sphere, and National Identity in Imperial Germany, 1890–1914 (2010) and edited World War I and Propaganda (2014) and A Call to Arms: Propaganda, Public Opinion, and Newspapers in the Great War (2004).

Contesting the Origins of the First World War: An Historiographical Argument