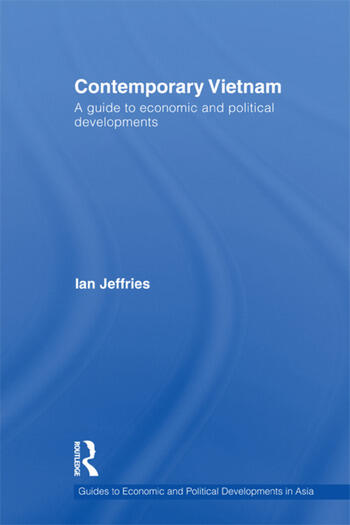 Contemporary Vietnam: A Guide to Economic and Political Developments

This book provides full details of contemporary economic and political developments in Vietnam.  It continues the overview of developments up to late 2005 which were covered in the author’s Vietnam: A Guide to Economic and Political Developments (also published by Routledge, 2006).  Key topics covered include Vietnam's success, in general, in maintaining high rates of growth in the face of problems such as inflation and the global financial crisis; continuing economic reforms; foreign trade and investment; battles against corruption; population growth; the determination of the Communist Party to maintain its hold on power; and Vietnam's response to public health problems such as AIDS, SARS and bird flu.

Ian Jeffries is Honorary Professor in the Department of Economics at Swansea University, UK.  His recent publications include two volumes covering the Economic and Political Developments in Contemporary China, alongside many books in the Routledge series, Guides to Economic and Political Developments in Asia, covering China, North Korea and Mongolia.

1. Socialist Economies and the Transition to the Market (1993).

`This weighty tome can be unreservedly commended ... Students and their teachers can learn a great deal from this book ... Excellent! Ian Jeffries has done us all a service' - Alec Nove, Europe-Asia Studies

`This book will serve as an invaluable source of information for anybody with an interest (academic, business or otherwise) in the area. Simply brilliant!' - Paul Nunn, Manchester Metropolitan University

`... a very welcome addition to the library of publications on the socialist world ... It is more than a textbook - it is also a reference book and a guide. Jeffries covers a vast area ... a truly formidable task to catch up with all the changes that are taking place in these countries, and the author does it with great success' - International Affairs

3. North Korea: a Guide to Economic and Political Developments, 2006

‘... provides ample sources of information for recent events, including refugee and nuclear issues … [and] the current economic situation … By making extensive use of quality newspapers and periodicals … the author presents us a broad picture of what North Korea looks like … it will be an indispensable source’ - Pacific Affairs

4. China: a Guide to Economic and Political Developments, 2006

Contemporary Vietnam: A Guide to Economic and Political Developments