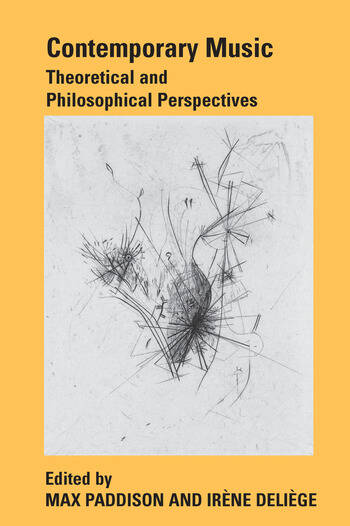 This collection of essays and interviews addresses important theoretical, philosophical and creative issues in Western art music at the end of the twentieth- and the beginning of the twenty-first centuries. Edited by Max Paddison and Irène Deliège, the book offers a wide range of international perspectives from prominent musicologists, philosophers and composers, including Célestin Deliège, Pascal Decroupet, Richard Toop, Rudolf Frisius, Alastair Williams, Herman Sabbe, FranÃ§ois Nicolas, Marc Jimenez, Anne Boissière, Max Paddison, Hugues Dufourt, Jonathan Harvey, and new interviews with Pierre Boulez, Brian Ferneyhough, Helmut Lachenmann, and Wolfgang Rihm. Part I is mainly theoretical in emphasis. Issues addressed include the historical rationalization of music and technology, new approaches to the theorization of atonal harmony in the wake of Spectralism, debates on the 'new complexity', the heterogeneity, pluralism and stylistic omnivorousness that characterizes music in our time, and the characterization of twentieth-century and contemporary music as a 'search for lost harmony'. The orientation of Part II is mainly philosophical, examining concepts of totality and inclusivity in new music, raising questions as to what might be expected from an autonomous contemporary musical logic, and considering the problem of the survival of the avant-garde in the context of postmodernist relativism. As well as analytic philosophy and cognitive psychology, critical theory features prominently, with theories of social mediation in music, new perspectives on the concept of musical material in Adorno's late aesthetic theory, and a call for 'an aesthetics of risk' in contemporary art as a means 'to reassert the essential role of criticism, of judgment, and of evaluation as necessary conditions to bring about a real public debate on the art of today'. Part III offers creative perspectives, with new essays and interviews from important contemporary composers who have mad

Max Paddison is Professor of Music Aesthetics, Department of Music, University of Durham, UK. He is the author of Adorno’s Aesthetics of Music and Adorno, Modernism and Mass Culture. Irène Deliège, University of Liège, Belgium, is founding editor of the journal Musicae Scientiae and founding member of ESCOM, the European Society of the Cognitive Sciences of Music.

'One of the most impressive theoretical and analytical achievements of this book is its promotion and development of a more 'harmonic' approach to contemporary music - even to the most radically pointillistic works of the early 1950s... the overall impression is of a concerted musicological effort to rethink new music beyond the fragmenting effects of Fortean pitch-set theory to sophisticated harmonic and polyphonic models that encourage the detailed and nuanced interpretation of individual works. It is not only in these large projects that this book succeeds, however. Some of the most eloquent and perceptive writers on contemporary music have been assembled here, and the details of the text are often as rewarding and provocative as the bigger picture... its overall contribution to contemporary music studies is substantial; it deserves to be a fixture on reading lists for many years to come.' Tempo 'Hats off to Max Paddison, who acted as an overall translator and translations editor. With great devotion he looked for English equivalents of sometimes almost untranslatable terms. This renders the essays of among others Deliège and Decroupet (who mostly publish in French and German) accessible to Anglophone readers in the best possible way... a coherent collection of essays and interviews...' Musicae scientiae