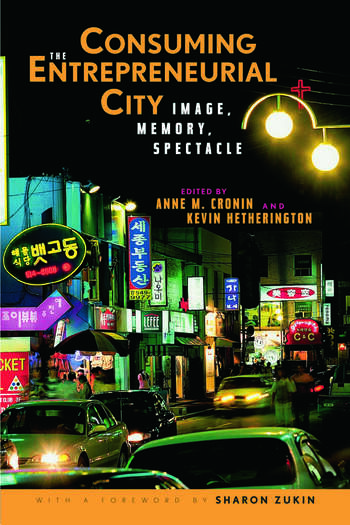 This collection offers a global perspective on the changing character of cities and the increasing importance that consumer culture plays in defining their symbolic economies. Increasingly, forms of spectacle have come to shape how cities are imagined and to influence their character and the practices through which we know them - from advertising and the selling of real estate, to youth cultural consumption practices and forms of entrepreneurship, to the regeneration of urban areas under the guise of the heritage industry and the development of a WiFi landscape. Using examples of cities such as New York, Sydney, Atlantic City, Barcelona, Rio de Janeiro, Douala, Liverpool, San Juan, Berlin and Harbin this book illustrates how image and practice have become entangled in the performance of the symbolic economy. It also argues that it is not just how the urban present is being shaped in this way that is significant to the development of cities but also that a prominent feature of their development has been the spectacular imagining of the past as heritage and through regeneration. Yet the ghosts that this conjures up in practice offer us a possible form of political unsettlement and alternative ways of viewing cities that is only just beginning to be explored.

Through this important collection by some of the leading analysts of consumption, cities and space Consuming the Entrepreneurial City offers a cutting edge analysis of the ways in which cities are developing and the implications this has for their future. It is essential reading for students of Urban Studies, Geography, Sociology, Cultural Studies, Heritage Studies and Anthropology.

1. Marketing the City in Crisis 2. Home Alone: Selling New Domestic Spaces 3. Urban Space and Entrepreneurial Relations 4. Stars, Meshes, Grids: Urban Network-Images and the Embodiment of Wireless Infrastructures 5. Always Turned on: Atlantic City as America’s Accursed Share 6. The Ruins of the Future: On Urban Transience and Durability 7. Just Another Coffee! Milking the Barcelona Model, Marketing a Global Image, and the Resistance of Local Identities 8. Broken Links, Changing Speeds, Spatial Multiples: Rewiring Douala 9. Consuming the Night: Space and Subjectivity in Contemporary Youth Culture 10. Contesting the Night as a Space for Consumption in Old San Juan, Puerto Rico 11. "The Atmosphere of a Foreign Country": Harbin’s Architectural Inheritance 12. Liverpool’s Rialto: A Ghost in the City of Culture

Anne M. Cronin is a Senior Lecturer in the Sociology department at Lancaster University, UK. She is the author of Advertising and Consumer Citizenship and Advertising Myths.

Kevin Hetherington is Professor of Geography at The Open University, UK. He has published widely on issues of spatiality and consumption. His most recent book with Routledge is Capitalism’s Eye: Cultural Spaces of the Commodity.