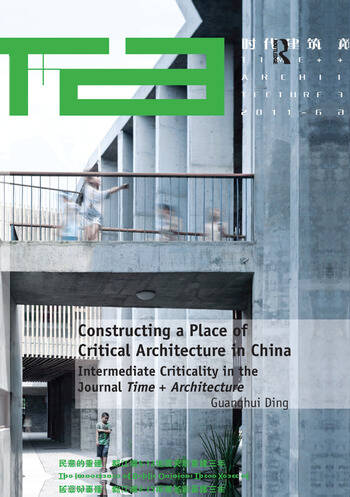 Constructing a Place of Critical Architecture in China: Intermediate Criticality in the Journal Time + Architecture

For the past 30 years, The Chinese journal Time + Architecture (Shidai Jianzhu) has focused on publishing innovative and exploratory work by emerging architects based in private design firms who were committed to new material, theoretical and pedagogical practices. In doing so, this book argues that the journal has engaged in the presentation and production of a particular form of critical architecture - described as an ’intermediate criticality’ - as a response to the particular constraints of the Chinese cultural and political context. The journal’s publications displayed a ’dual critique’ - a resistant attitude to the dominant modes of commercial building practice, characterised by rapid and large-scale urban expansion, and an alternative publishing practice focusing on emerging, independent architectural practitioners through the active integration of theoretical debates, architectural projects, and criticisms. This dual critique is illustrated through a careful review and analysis of the history and programme of the journal. By showing how the work of emerging architects, including Yung Ho Chang, Wang Shu, Liu Jiakun and Urbanus, are situated within the context of the journal’s special thematic editions on experimental architecture, exhibition, group design, new urban space and professional system, the book assesses the contribution the journal has made to the emergence of a critical architecture in China, in the context of how it was articulated, debated, presented and perhaps even ’produced’ within the pages of the publication itself. The protagonists of critical architecture have endeavoured to construct an alternative mode of form and space with strong aesthetic and socio-political implications to the predominant production of architecture under the current Chinese socialist market economy. To rebel against certain forms of domination and suppression by capital and power is by no means to completely reject them; rather, it is to use thos

Guanghui Ding received a PhD in architecture from the University of Nottingham, UK. His research concentrates on the interaction between the critical practice of architecture and politics in modern and contemporary China.

’The architectural revolution in China in the past 30 years is daunting for any outsider. Through its study of a local architectural journal, Dr Ding unfolds a picture of how critiques and experiments have changed the profession and townscapes in China. Logically and lucidly written, the book grasps the representative trends and facts of the country during its drastic transformation.’ Charlie Q.L. Xue, author of Building a Revolution: Chinese Architecture Since 1980 ’Guanghui Ding’s study provides us with a very useful introduction to modern architecture in China. Even more insightful is the particular focus on the highly influential journal Time + Architecture, exploring how critical attitudes may be expressed in a world of complex aesthetic, socio-economic and political conditions. Highly recommended.’ Iain Borden, The Bartlett School of Architecture, University College London, UK ’With excerpts from Time+Architecture and several other periodicals, Guanghui Ding has made an insightful and engaging case for an alternative, critical and ultimately more interesting interpretation of an increasingly influential strand of contemporary Chinese architecture by new generations of architects operating beyond the realm of design institutes and commercial practices.’ Peter G. Rowe, Harvard University, USA

Constructing a Place of Critical Architecture in China: Intermediate Criticality in the Journal Time + Architecture