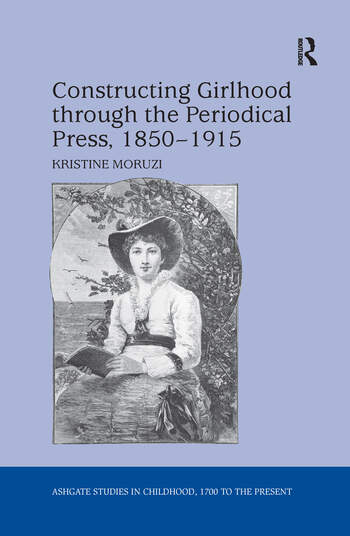 Constructing Girlhood through the Periodical Press, 1850-1915

Focusing on six popular British girls' periodicals, Kristine Moruzi explores the debate about the shifting nature of Victorian girlhood between 1850 and 1915. During an era of significant political, social, and economic change, girls' periodicals demonstrate the difficulties of fashioning a coherent, consistent model of girlhood. The mixed-genre format of these magazines, Moruzi suggests, allowed inconsistencies and tensions between competing feminine ideals to exist within the same publication. Adopting a case study approach, Moruzi shows that the Monthly Packet, the Girl of the Period Miscellany, the Girl's Own Paper, Atalanta, the Young Woman, and the Girl's Realm each attempted to define and refine a unique type of girl, particularly the religious girl, the 'Girl of the Period,' the healthy girl, the educated girl, the marrying girl, and the modern girl. These periodicals reflected the challenges of embracing the changing conditions of girls' lives while also attempting to maintain traditional feminine ideals of purity and morality. By analyzing the competing discourses within girls' periodicals, Moruzi's book demonstrates how they were able to frame feminine behaviour in ways that both reinforced and redefined the changing role of girls in nineteenth-century society while also allowing girl readers the opportunity to respond to these definitions.

Kristine Moruzi is a Grant Notley Postdoctoral Fellow in the Department of English and Film Studies at the University of Alberta.

Semi-finalist, The Robert and Vineta Colby Scholarly Book Prize, awarded by the Research Society for Victorian Periodicals (RSVP), 2012 'An important contribution to girls’ studies, children’s literature, and periodical scholarship, Kristine Moruzi’s book provides a nuanced historicizing of the emergence of girls as subject, agent, target audience, and contested ground in relation to mass print culture.' Linda Hughes, Texas Christian University, USA 'Moruzi’s highly accessible text [...] reminds us that the Victorian dialogue about what girls were and could be was every bit as vibrant and conflicted as our own.' Childhood in the Past 'Constructing Girlhood through the Periodical Press, 1850-1915 was honoured as a semi-finalist in the Robert and Vineta Colby Book Prize for books published in 2012. The prize is judged by scholars who know the difficulties and benefits of working with periodicals, and the recognition of Kristine Moruzi’s work is a fitting acknowledgement of its careful methodology and thought-provoking conclusions.' Victorian Periodicals Review 'Historians will find this book of particular interest because it marks the increasing mobility and independence of girls in a shifting cultural milieu. Childhood studies students will find here a model for dissertations that dialogue culture and childhood. Literary critics will also enjoy the dialogue between fiction, columns, letters, and images in periodicals...' Children’s Literature Association Quarterly ’This book is a very valuable and thought-provoking contribution to the field of the periodical press studies, and a must-have for any researcher of Victorian and early Edwardian studies.’ Cahiers Victoriens et Edouardians ’Her analyses provide a wealth of information both on the magazines she discusses, and on the cultural climate' surrounding the topics in focus, and hence her study is definitely worth reading.’ Anglistik ’...for people interested in the early magazines f

Constructing Girlhood through the Periodical Press, 1850-1915