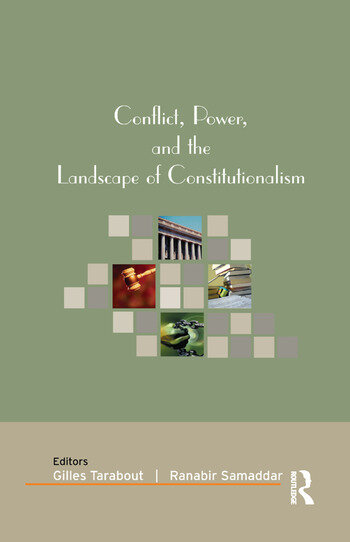 Conflict, Power, and the Landscape of Constitutionalism

The book seeks to critically examine the implication of a constitution of law for a political society. It presents a collection of essays that seek to investigate how power acts on power, how limits produce excess, how separation of powers produces the union of powers (sanctified by the very constitution that had guaranteed the division in the first place), and how the theory of separation is, at the same time, a myth and a reality. At the backdrop of the book, of course, is the theory that every good constitution rigorously separates the legislature, the executive, and the judiciary from one another to guarantee the independence of each of these powers, such that this separation results in life, liberty, and security. If a constitution, however, symbolises and produces power, precisely because it separates one site of power from another, it follows that it is power itself that is the limit of power. Constitutionalism as a political culture of laws, therefore, must explain the dynamics of power.

The book addresses both constitutions and the societies in which they emerge. Many of the essays in this collection show how institutional practices originating from a legal text create a matrix of power that owes its life, neither to a contract between men, nor between the state and men, nor even between the society and men, but rather to relations established, organized, and formalized by laws.

The collection is significant because it gives colonial and post-colonial experiences a justified place in studies of law and constitutionalism, for it shows that while Montesquieu, Kant, and Burke each in their own way were promoting the spirit of laws, a more significant history of law-making was being enacted in order to defend a particular rule, and a particular type of government on another side of the world.

Based on comparative studies in several countries across three continents, the book centrally deals with issues of constitutionalism, political representation and citizenship.

Introduction: Conflict, Power, and the Landscape of Constitutions Ranabir Samaddar  1. Constitution Making in the Process of Decolonisation Dietmar Rothermund  2. The Extra-ordinary State – French Rule in Algeria Olivier Le Cour Gransmaison  3. Law and Terror in the Age of Constitution Making Ranabir Samaddar  4. The Citizen and Subject: A Postcolonial Constitution for the European Union? Sandro Mezzadra  5. The Silent Erosion: Anti-Terror Laws and Shifting Contours of Jurisprudence in India Ujjwal Kumar Singh  6. The Post-communist Revolution in Russia and the Genesis of Representative Democracy Artemy Magun  7. The Acts and Facts of Women’s Autonomy in India Paula Banerjee  8. The Limits of Constitutional Law: Public Policies and the Constitution Afonso Da Silva  9. Regulation of the Particular and its Socio-Political Effects Rastko Moènik  10. Constitutionalism in Pakistan: The Lingering Crisis of Diarchy Mohammad Waseem

Gilles Tarabout is a social anthropologist. He is Senior Fellow at the French National Centre for Scientific Research (CNRS), Director of the South Asia programme of collaboration in the social sciences and the humanities, Foundation Maison des Sciences de l’Homme, Paris, and Visiting Professor at the University Paris X - Nanterre.

Ranabir Samaddar is Director, Mahanirban Calcutta Research Group, and has been vitally involved in initiating peace studies programmes in South Asia. He has worked extensively on issues of justice and rights in the context of conflicts in South Asia. The Politics of Dialogue is the culmination of his work on justice, rights, and peace.

Conflict, Power, and the Landscape of Constitutionalism