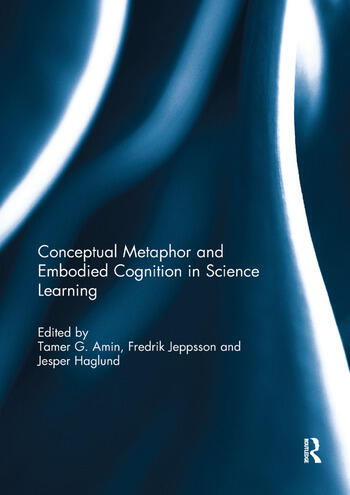 Scientific concepts are abstract human constructions, invented to make sense of complex natural phenomena. Scientists use specialised languages, diagrams, and mathematical representations of various kinds to convey these abstract constructions. This book uses the perspectives of embodied cognition and conceptual metaphor to explore how learners make sense of these concepts. That is, it is assumed that human cognition – including scientific cognition – is grounded in the body and in the material and social contexts in which it is embedded. Understanding abstract concepts is therefore grounded, via metaphor, in knowledge derived from sensory and motor experiences arising from interaction with the physical world.

The volume consists of nine chapters that examine a number of intertwined themes: how systematic metaphorical mappings are implicit in scientific language, diagrams, mathematical representations, and the gestures used by scientists; how scientific modelling relies fundamentally on metaphor and can be seen as a form of narrative cognition; how implicit metaphors can be the sources of learner misconceptions; how conceptual change and the acquisition of scientific expertise involve learning to coordinate the use of multiple implicit metaphors; and how effective instruction can build on recognising the embodied nature of scientific cognition and the role of metaphor in scientific thought and learning. The volume also includes three extended commentaries from leading researchers in the fields of cognitive linguistics, the learning sciences, and science education, in which they reflect on theoretical, methodological and pedagogical issues raised in the book. This book was originally published as a special issue of the International Journal of Science Education.

1. The Importance of Language in Students’ Reasoning About Heat in Thermodynamic Processes David T. Brookes and Eugenia Etkina

2. Varying Use of Conceptual Metaphors across Levels of Expertise in Thermodynamics Fredrik Jeppsson, Jesper Haglund and Tamer G. Amin

3. On Conceptual Metaphor and the Flora and Fauna of Mind: Commentary on Brookes and Etkina; and Jeppsson, Haglund and Amin Bruce Sherin

6. Some Challenges in the Empirical Investigation of Conceptual Mappings and Embodied Cognition in Science Education: Commentary on Dreyfus, Gupta and Redish; and Close and Scherr Rafael Núñez

7. An Analysis of Metaphors Used by Students to Describe Energy in an Interdisciplinary General Science Course Rachael Lancor

8. Understanding Starts in the Mesocosm: Conceptual metaphor as a framework for external representations in science teaching Kai Niebert and Harald Gropengiesser

9. From Stories to Scientific Models and Back: Narrative framing in modern macroscopic physics Hans U. Fuchs

10. On the Significance of Conceptual Metaphors in Teaching and Learning Science: Commentary on Lancor; Niebert and Gropengiesser; and Fuchs David F. Treagust and Reinders Duit

Tamer Amin is Associate Professor and Director of the Science and Mathematics Education Center in the Department of Education at the American University of Beirut, Lebanon. His research focuses on the development of scientific understanding and reasoning, with a particular emphasis on how language relates to this process. He is currently co-editing (with Olivia Levrini) a forthcoming Routledge publication entitled Converging Perspectives on Conceptual Change: Mapping an Emerging Paradigm in the Learning Sciences.

is Assistant Professor in the Department of Social and Welfare Studies at Linköping University, Sweden. His research focuses on the teaching and learning of thermal science at different age levels. He has an interest in embodied cognition and, in particular, how metaphorical language can support students’ learning. He currently studies how primary students’ meaning-making of science content can be promoted by mediation through different semiotic modes (e.g. verbal language, body language, images, or models).

is a Postdoctoral Researcher and Docent in Physics with Specialization in Physics Education at the Department of Physics and Astronomy, Uppsala University, Sweden. His research focuses on the teaching and learning of thermal science at different age levels. He has a particular interest in embodied cognition and how analogies and metaphors can support students’ learning. Recently, his study has focused on how infrared cameras can be used in open-ended laboratory activities.