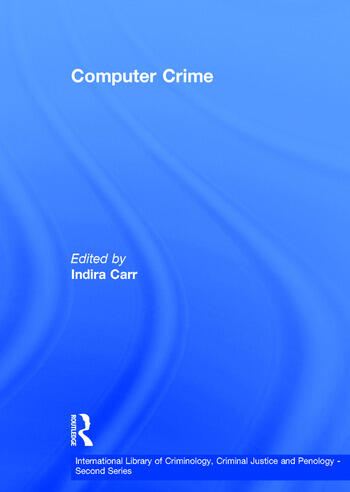 Alongside its positive impact of providing a global reach, the Internet is prone to a variety of abuses. In the 1990s it was unauthorised access of computers and impairment of the operation of computers through the introduction of viruses and worms that took centre stage. Since then the potential of the Internet for fraudulent activities has been realised by the criminal fraternity and, in recent years, we have seen, for instance, the rise of identity theft and the widespread distribution of offensive and illegal materials. The collection of essays in this volume, while being highly selective, provides a snapshot of the parameters of computer crime, the legal response and discussions surrounding ways to improve the security of cyberspace.

Contents: Introduction; Part I The Parameters of Computer Crime: Shoring up the weakest link: what lawmakers around the world need to consider in developing comprehensive laws to combat cyber crime, Richard W. Downing; The voyeuristic hacker, Brian M. Hofsttadt; 'Phishing for a solution: domestic and international approaches to decreasing online identity theft, Lauren L. Sullins; Cyberextortion at online gambling sites: criminal organization and legal challenges, John McMullan and Anshul Rege. Part II Harmonisation of Computer Crime Laws - the Council of Europe Convention on Cybercrime and the Additional Protocol to the Council of Europe Convention: The Council of Europe convention on cybercrime, Mike Keyser; The convention on cybercrime: a harmonized implementation of international penal law: what prospects for procedural due process?, Miriam F. Miquelon-Weismann; In search of a balance between police power and privacy in the cybercrime treaty, D.C. Kennedy; Go to jail - do not pass go, do not pay civil damages: the United States' hesitation towards the International Convention on Cybercrime's copyright provision, Adrienne N. Kitchen; Combating child pornography on the internet: the Council of Europe's convention on cybercrime, Dina I. Oddis; Internet hate speech: the European framework and the emerging American haven, Christopher D. Van Blarcum. Part III Investigation, Jurisdiction and Sentencing Issues: The critical challenges from international high-tech and computer related crime at the millennium, Michael A. Sussman; International cyber-jurisdiction: a comparative analysis, Ray August; Cyber crime and punishment: filtering out internet felons, Jessica Habib. Part IV Cyber Security: Who's to protect cyberspace, Christopher J. Coyne and Peter T. Leeson; Hacking, poaching, and counterattacking: digital counterstrikes and the contours of self-help, Bruce P. Smith; Virtual crime, virtual deterrence: a skeptical of self-help, architecture and civil liability, Or

Indira Carr is a Professor at the School of Law, University of Surrey, UK

'...this collection is a good starting point for further reading ... a useful addition to a library of material on the subject of cybercrime' Journal of the Law Society of Scotland