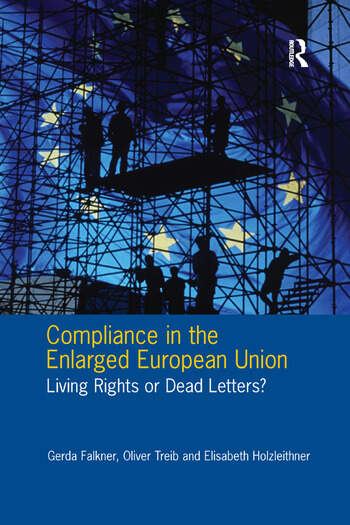 This book offers a rigorous empirical and theoretical analysis of an important dimension of European integration - the implementation of EU legislation and its effect in the wake of the accession of ten new member states to the EU in 2004. The authors concentrate on the key field of social policy, which is of vital interest for the viability of the welfare state and the future of labour law standards in Europe. Following on from a previous prize-winning study, Complying with Europe: EU Harmonization and Soft Law in the Member States, this new volume looks at how EU social legislation works in practice, particularly in Central and Eastern European countries. The authors offer in-depth empirical case studies of three of the most significant pieces of EU social legislation: the Working Time Directive, the Equal Treatment Directive and the Employment Equality Directive. Their analysis makes it possible for the authors to make useful generalizations for the policy field as a whole.

'This rich and fine-grained study offers valuable insights into how European Union social legislation is operating in practice in several of the member states from central Europe. The authors draw out thoughtful recommendations on ways of promoting more systematic compliance in the future.' Helen Wallace, London School of Economics and Political Science, UK