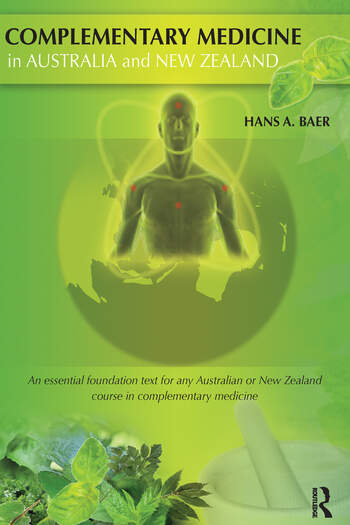 Complementary Medicine in Australia and New Zealand: Its popularisation, legitimation and dilemmas

In the late nineteenth century on the eve of the formation of Australia as a nation-state in 1902, the Australian medical system could be best described as a pluralistic one in the sense that while regular medicine constituted the predominant medical system, it was not clearly the dominant one in that regular physicians faced competition from a wide array of alternative practitioners. As regular medicine increasingly assumed the guise of being scientific, it evolved into biomedicine and developed a link with corporate and state interests in the early twentieth century in Australia, as in other capitalist developed societies.

Relying upon state support, Australian biomedicine has achieved dominance over alternative medical system, such as homeopathy, herbal medicine, osteopathy, chiropractic, and naturopathy. Various social forces, particularly the development of the holistic health movement, have served to challenge biomedical dominance in Australia, like elsewhere.

Since the 1980s certain heterodox medical systems, particularly chiropractic, osteopathy, acupuncture and Chinese medicine, naturopathy, Western herbalism, and homeopathy, have achieved considerable recognition from the Australian state, either at the federal level or at the state and territorial levels. Indeed, the Australian state appears to have gone further than any other Anglophone country in terms of providing public funding for complementary medicine education. Conversely, it has committed a limited amount of funding for complementary medicine research compared to the United States.

Hans A. Baer is Senior Lecturer in the School of Philosophy, Anthropology, and Social Inquiry and the Centre for Health and Society at the University of Melbourne. He has published 16 books, co-edited several special journal issues, and published some 150 book chapters and journal articles. Some of his books include Recreating Utopia in the Desert; African American Religion; Encounters with Biomedicine: Case Studies in Medical Anthropology; Critical Medical (with Merrill Singer); Medical Anthropology and the World System: A Critical Perspective (with Merrill Singer and Ida Susser); Biomedicine and Alternative Healing Systems in America: Issues of Class, Race, Ethnicity, and Gender; Toward an Integrative Medicine; Introducing Medical Anthropology (with Merrill Singer); Global Warming and the Political Ecology of Health: Emerging Crises and Systemic Solutions (with Merrill Singer). In early 2008, Baer began to investigate climate politics and the climate movement in Australia, an on-going project. Hans considers himself a scholar-activist and has been involved in various movements over the years, including peace, social justice, anti-apartheid, labor, environmental, and climate justice movements.

Complementary Medicine in Australia and New Zealand: Its popularisation, legitimation and dilemmas