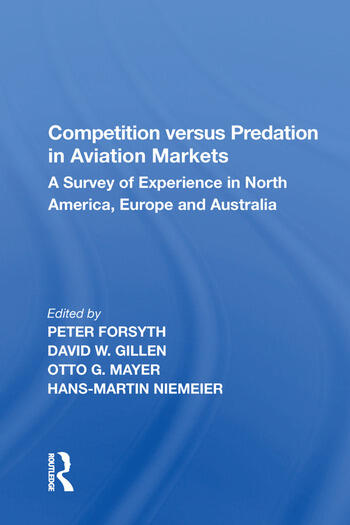 Competition versus Predation in Aviation Markets: A Survey of Experience in North America, Europe and Australia

Prior to liberalization, there was little scope for predatory behaviour in the aviation market. However, following deregulation, new entrants sought to compete with entrenched incumbents. Low-cost carriers (LCCs) gained significant market share, which in turn provoked many different kinds of defensive response. Having put pressure on established carriers, low-cost airlines are themselves feeling the pressure of competition from new operators. While it is normal and natural for airlines to react to competition - modifying their services, the ways in which they offer them and their prices - when does aggressive commercial behaviour go too far and become predation? This book considers what exactly is meant by 'predation' in the aviation environment, and explores the strategies LCCs adopt in order to gain market share, as well as the strategies of the established airlines in response to competition from new entrants to the market. It also addresses the key question of what competition policy should do to ensure intensive competition. Competition versus Predation in Aviation Markets brings together contributions from around the world, from airlines, government agencies, leading academics and consultants, providing a wealth of perspectives on a business practice crucial to airline survival.

Competition versus Predation in Aviation Markets: A Survey of Experience in North America, Europe and Australia