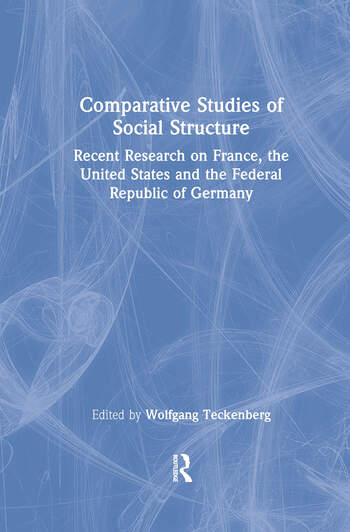 A collection of essays with the purpose of stimulate interest and provoke discussion and criticism, and so contributing to our understanding of the three very different societies of France, the USA and Germany. Each essay stands on its own, and it is the authors’ intention to explain some of the differences between Germany and the United States in the first article. The second essay suggests that career mobility in France has more in common with social mobility in the United States than in Germany. The third essay, while not an explicitly comparative analysis, was included because it clearly shows the close links between the educational and occupational systems in Germany, a source of major differences with the United States, at least until the 1980s. The last section contains analyses of income attainment. Drawing on studies in the United States conducted by Erik O. Wright, the fourth essay compares the effects of education and position on income attainment. Since these can be construed as class effects, we were also curious about other types of potential positional and nonvertical income differences in a comparison of France, the United States, and the Federal Republic of Germany (the fifth essay). The concluding summary is very brief, giving only preliminary answers to the more detailed questions raised in the comparative empirical research projects.

This comprehensive text on the international environment examines not only traditional political-military concerns but also economic, ethnic, and environmental issues and the role of crime, terrorism, the drug trade, and migration in the security environment of Russia and East Asia This approach takes account of both the internal and external aspects of security problems and their interplay.

Wolfgang Teckenberg was trained in sociology, history, and languages at the University of Cologne. He was an assistant professor at the Institute of Sociology, University of Kiel, from 1978 until 1985, and is currently at the Institute of Sociology, University of Heidelberg. During 1981–82, as a German Marshall Fund fellow, Teckenberg was visiting scholar at the University of Wisconsin, Madison, and at Columbia University in New York. He has done extensive research on social stratification, mobility, and the impact of class in comparative perspective and has published numerous articles on these and other sociological topics. He is the author of The Social Structure of the Soviet Working Class: Toward an Estatist Society? (International Journal of Sociology, Vol. X I , No. 4) and of the USSR volume in the Gegenwartgesellschaften [Contemporary Societies] series published by Teubner Verlag (1983).