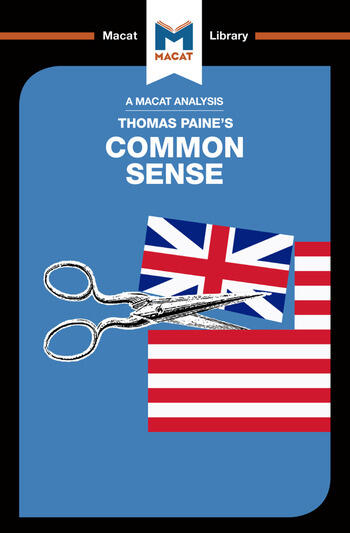 Thomas Paine’s 1776 Common Sense has secured an unshakeable place as one of history’s most explosive and revolutionary books. A slim pamphlet published at the beginning of the American Revolution, it was so widely read that it remains the all-time best selling book in US history.

An impassioned argument for American independence and for democratic government, Common Sense can claim to have helped change the face of the world more than almost any other book. But Paine’s pamphlet is also a masterclass in critical thinking, demonstrating how the reasoned construction of arguments can be reinforced by literary skill and passion. Paine is perhaps more famous as a stylist than as a constructor of arguments, but Common Sense marries the best elements of good reasoning to its polemic. Moving systematically from the origins of government, through a criticism of monarchy, and on to the possibilities for future democratic government in an independent America, Paine neatly lays out a series of persuasive reasons to fight for independence and a new form of government. Indeed, as the pamphlet’s title suggested, to do so was nothing more than ‘common sense.’

Who was Thomas Paine?

What does Common Sense Say?

Why does Common Sense  Matter?

Ian Jackson is a PhD student in the Politics, Philosophy and Religion department at Lancaster University. He is interested in the role new media plays in the dissemination of ideas.