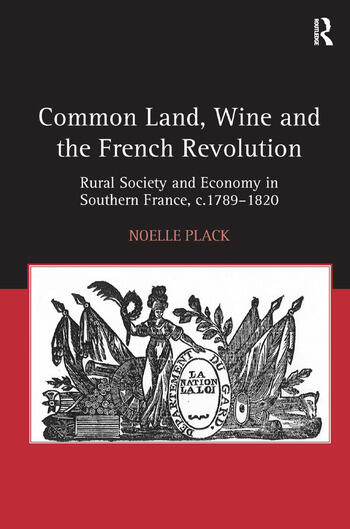 Recent revisionist history has questioned the degree of social and economic change attributable to the French Revolution. Some historians have also claimed that the Revolution was primarily an urban affair with little relevance to the rural masses. This book tests these ideas by examining the Revolutionary, Napoleonic and Restoration attempts to transform the tenure of communal land in one region of southern France; the department of the Gard. By analysing the results of the legislative attempts to privatize common land, this study highlights how the Revolution's agrarian policy profoundly affected French rural society and the economy. Not only did some members of the rural community, mainly small-holding peasants, increase their land holdings, but certain sectors of agriculture were also transformed; these findings shed light on the growth in viticulture in the south of France before the monocultural revolution of the 1850s. The privatization of common land, alongside the abolition of feudalism and the transformation of judicial institutions, were key aspects of the Revolution in the countryside. This detailed study demonstrates that the legislative process was not a top-down procedure, but an interaction between a state and its citizens. It is an important contribution to the new social history of the French Revolution and will appeal to economic and social historians, as well as historical geographers.

Contents: Introduction: the French Revolution, the peasantry and village common land; Mise en scène - the department of the Gard; From liberal to radical revolution, 1789-1792; The Jacobin revolution, 1793; Post-1793: backlash and regularization; The Empire and beyond; The socio-economic impact of common land reform; Conclusion; Appendices; Bibliography; Index.

'This is an insightful, very thoroughly researched and clearly written book which makes a notable contribution to the social and economic history of the French Revolution and its aftermath. Plack's case is compelling, that the revolutionary era had profound socio-economic consequences in southern France, questioning some of the oldest "certainties" about the period. This is scholarship of high quality.' Peter McPhee, University of Melbourne, Australia 'This book not only provides a clear and sure-footed account of the agrarian reforms of the French Revolution, it argues persuasively that the privatisation of common land between 1789 and 1820 played a role in promoting a structural transformation of the countryside in those regions of southern France with a vocation for vine monoculture.' Peter M. Jones, University of Birmingham, UK ’... this is a welcome and commendable book. Readers will appreciate its up-to-date discussion of scholarly debates and the painstaking archival research that results in Plack's convincing demonstration that the common land legislation of 1793 had a far greater impact than previously thought.’ American Historical Review '... this well-reasoned and well-written book certainly contributes to the historiography of agriculture and the peasants during the French Revolution.' European Review of History