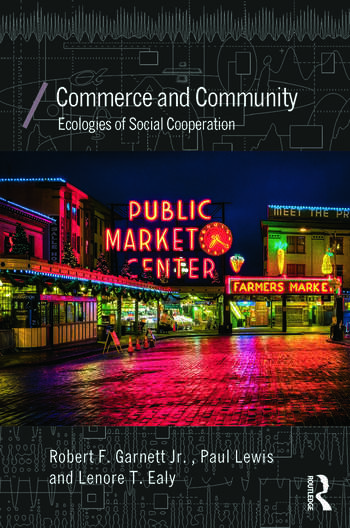 Since the end of the Cold War, the human face of economics has gained renewed visibility and generated new conversations among economists and other social theorists. The monistic, mechanical "economic systems" that characterized the capitalism vs. socialism debates of the mid-twentieth century have given way to pluralistic ecologies of economic provisioning in which complexly constituted agents cooperate via heterogeneous forms of production and exchange. Through the lenses of multiple disciplines, this book examines how this pluralistic turn in economic thinking bears upon the venerable social–theoretical division of cooperative activity into separate spheres of impersonal Gesellschaft (commerce) and ethically thick Gemeinschaft (community).

Drawing resources from diverse disciplinary and philosophical traditions, these essays offer fresh, critical appraisals of the Gemeinschaft / Gesellschaft segregation of face-to-face community from impersonal commerce. Some authors issue urgent calls to transcend this dualism, whilst others propose to recast it in more nuanced ways or affirm the importance of treating impersonal and personal cooperation as ethically, epistemically, and economically separate worlds. Yet even in their disagreements, our contributors paint the process of voluntary cooperation – the space commerce and community – with uncommon color and nuance by traversing the boundaries that once separated the thin sociality of economics (as science of commerce) from the thick sociality of sociology and anthropology (as sciences of community).

This book facilitates critical exchange among economists, philosophers, sociologists, anthropologists, and other social theorists by exploring the overlapping notions of cooperation, rationality, identity, reciprocity, trust, and exchange that emerge from multiple analytic traditions within and across their respective disciplines.

Lenore T. Ealy is President of The Philanthropic Enterprise, USA.