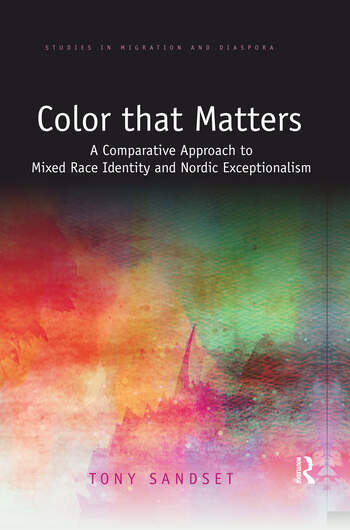 Color that Matters: A Comparative Approach to Mixed Race Identity and Nordic Exceptionalism

This book examines the ways in which mixed ethnic identities in Scandinavia are formed along both cultural and embodied lines, arguing that while the official discourses in the region refer to a "post-racial" or "color blind" era, color still matters in the lives of people of mixed ethnic descent. Drawing on research from people of mixed ethnic backgrounds, the author offers insights into how color matters and is made to matter and into the ways in which terms such as "ethnic" and "ethnicity" remain very much indebted to their older, racialized grammar.

moves beyond the conventional Anglo-American focus of scholarship in this field, showing that while similarities exist between the racial and ethnic discourses of the US and UK and those found in the Nordic region, Scandinavia, and Norway in particular, manifests important differences, in part owing to a tendency to view itself as exceptional or outside the colonial heritage of race and imperialism. Presenting both a contextualization of racial discourses since World War II based on documentary analysis and new interview material with people of mixed ethnic backgrounds, the book acts as a corrective to the blind spot within Scandinavian research on ethnic minorities, offering a new reading of race for the Nordic region that engages with the idea that color has been emptied of legitimate cultural content.

Part I: Methodology and Theory: Towards Grounding the Book

4. From Race to Ethnicity: The Purification of a Discourse; UNESCO and Norway’s Western Others

5. Discourses of Race And Ethnicity: A Difficult Deployment Of Colour

7. No Guarantees, Just Paradoxes to Offer: In Lieu Of The Typical Conclusion

Tony Sandset is Junior Research Fellow at the University of Oslo, Norway.

Color that Matters: A Comparative Approach to Mixed Race Identity and Nordic Exceptionalism