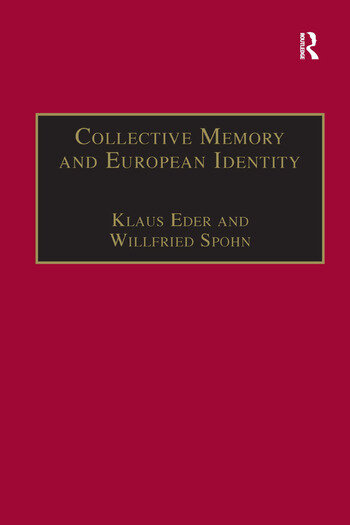 Collective Memory and European Identity: The Effects of Integration and Enlargement

Is it possible to create a collective European identity? In this volume, leading scholars assess the link between collective identity construction in Europe and the multiple memory discourses that intervene in this construction process. The authors believe that the exposure of national collective memories to an enlarging communicative space within Europe affects the ways in which national memories are framed. Through this perspective, several case studies of East and West European memory discourses are presented. The first part of the volume elaborates how collective memory can be identified in the new Europe. The second part presents case studies on national memories and related collective identities in respect of European integration and its extension to the East. This timely work is the first to investigate collective identity construction on a pan-European scale and will be of interest to academics and postgraduate students of political sociology and European studies.

Klaus Eder is Professor of Sociology at the Humboldt-UniversitÃ¤t zu Berlin. His publications include: 'Die Entstehung staatlich organisierter Gesellschaften' (Suhrkamp 1976), 'Geschichte als LernprozeÃŸ? (Suhrkamp 1985), 'Die Vergesellschaftung der Natur (Suhrkamp 1988), 'The New Politics of Class (Sage 1993), 'The Social Construction of Nature' (Sage 1996). He has co-edited (with Bernd Giesen) European Citizenship (OUP 2001) and (with Crouch/Tambini) Citizenship, Markets, and the State (OUP 2001) and (with Kousis) Environmental Politics in Southern Europe (Kluwer 2001). He has coauthored (with Giesen/Schmidtke/Tambini) Collective Identities in Action (Ashgate 2002). Willfried Spohn, PD Dr., is adjunct professor in sociology at FU Berlin and is currently director of an EU research project 'Representations of Europe and the Nation in current and prospective member states - elites, media and civil society' at the European University Viadrina, Frankfurt-Odra. His recent publications are (with Steven Hanson): Can Europe Work? Germany and the Reconstruction of Postcommunist Societies, Seattle 1995; 'History and the Social Sciences,' International Encyclopedia of the Social and Behaviorial Sciences, London 2001; (with Anna Triandafyllidou): Europeanization, National Identities and Migration, London 2002, and 'Multiple Modernity, Nationalism and Religion - A Global Perspective,' in: U. Schuerkens (ed.), Global Forces and Local Life-Worlds, 2003.

Collective Memory and European Identity: The Effects of Integration and Enlargement