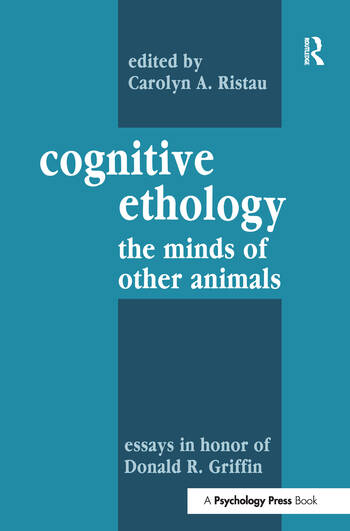 This collection of essays was written by former students, associates, admirers, critics and friends of Donald R. Griffin -- the creator of cognitive ethology. Stimulated by his work, this volume presents ideas and experiments in the field of cognitive ethology -- the exploration of the mental experiences of animals as they behave in their natural environment during the course of their normal lives.

Cognitive Ethology discusses the possibility that animals may have abilities to experience, communicate, reason, and plan beyond those usually ascribed to them in a "black box" or "stimulus-response" interpretation of their behavior. Contributions from scientists who have been associated with or influenced by Griffin offer a lively array of views, some disparate from one another and some especially selected to present approaches contrary to his.

"Together with our curiosity about the other creatures with which we share the earth, then, there is a second motivation for the studies reported in... Cognitive Ethiology: curiosity about our own past. In studying the minds of other animals, we find clues to the evolution of our own intellect.
—The Sciences

"...a particularly well-edited book...[with] an excellent overview and intergration of the issues....an excellent forum for learning about one of the most controversial and exciting issues in animal behavior research."
—Science

"This volume has the great merit of presenting the pros and cons of the cognitive approach to ethology. It is highly recommended to all students of animal behavior and more generally to anyone interested in the relationships between humans and other animals."
—Biochemical Systematics

"Carolyn Ristau has the merit of having assembled a number of scientists coming from different areas of research, providing the reader with a varied and stimulating view on a fascinating subject. This is a very interesting book, dealing with a difficult subject."
—Augusto F. Vitale
Istituto Superiore di Sanita