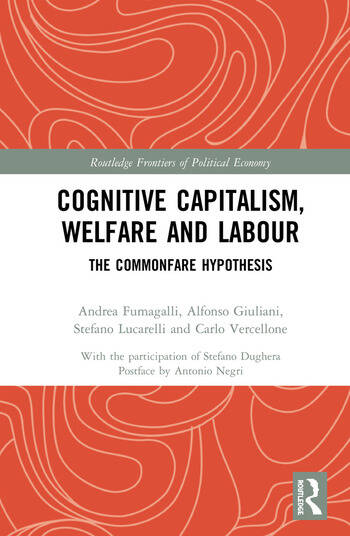 This book deals with the transformations of both accumulation process and labour in the transition from a Fordist to a cognitive capitalism paradigm, with specific regard to Western economies. It outlines the advent, after industrial capitalism, of a new phase of the capitalist system in which the value of cognitive labour becomes dominant. In this framework, the central stakes of capital valorisation and forms of property are directly based on the control and privatization of the production of collective knowledge. Here, the transformation of knowledge itself, into a commodity or a fictitious capital, is analyzed.

Building on this foundation, the authors outline their concept of "commonfare." This idea of commonfare implies, as a prerequisite, the social re-appropriation of the gains arising from the exploitation of those social relations which are the basis of accumulation today. This re-appropriation does not necessarily lead to the transition from private to public ownership but it does make it necessary to distinguish between common goods and the commonwealth. This book explains this distinction and how common goods and the commonwealth require a different framework of analysis.

This volume will be of great interest to all scholars and researchers, as well as a more general readership, who wish to develop a critical thinking of the mainstream analysis of this topic. Contributing to the "Marxism-heterodox" approach using rigorous theoretical analysis and empirical evidence, it is aimed at all those who act socially and aspire to a better understanding of the development and the contradictions of contemporary capitalism.

1. An introduction to Cognitive Capitalism: A Marxist Approach, Carlo Vercellone and Alfonso Giuliani

2. Metamorphosis of the Theory of Value and Becoming-rent of Profit: An Attempt to Clarify the Terms of a Debate, Carlo Vercellone and Stefano Dughera

7. Common and Commons in the Contradictory Dynamics between Knowledge-based Economy and Cognitive Capitalism, Carlo Vercellone and Alfonso Giuliani

Andrea Fumagalli is Associate Professor of Economics at the Department of Economics and Management at University of Pavia, Italy. He also teaches at IUSS Pavia and his research focuses on issues of labour precarity, on basic income and transformations of contemporary capitalism.