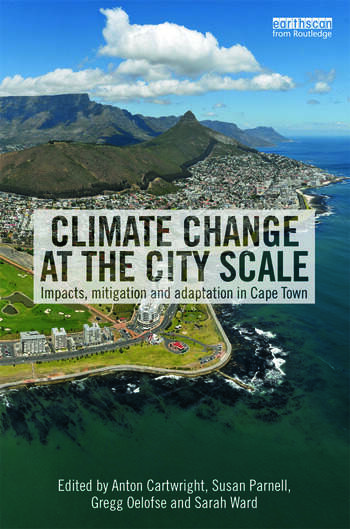 Climate Change at the City Scale: Impacts, Mitigation and Adaptation in Cape Town

Climate change impacts are scale and context specific, and cities are likely to bear some of the greatest costs. In recent years  cities have begun to craft their own climate change responses against the backdrop of the reluctance displayed by nation-states in committing to emissions reductions and managing the consequences of climate change.

Climate Change at the City Scale presents a fresh contribution to climate change literature, which has largely neglected the role of cities in spite of their increasingly important role in the global economy.  The book focuses on the impacts of climate change in the rapidly evolving city of Cape Town, and captures the experiences of the Cape Town Climate Change Think Tank, a hybrid knowledge partnership which has produced research on a range of urban governance, impacts, mitigation and adaptation challenges by the City.
Cape Town has long been acknowledged as an innovator in the area of urban environmental management, notwithstanding its limited resources to manage the demand for a more resilient and equitable future. By documenting the work and experiences of the  City’s efforts to define its own climate future, the book provides a provocative case study of the way in which the science-policy interface can be managed to inform urban transformation.

Anton Cartwright has Masters Degrees in Development Economics and Environmental Change and Management from Oxford University, where he was a Rhodes Scholar. Since 1998 he has worked in his own consultancy, Econologic, for a wide range of clients including the World Bank, the World Wildlife Fund, the United Nations (FAO, UNDP), the European Commission, the Rockefeller Foundation, the Stockholm Environment Institute and private companies and government departments in South Africa. In 2004 he founded the not-for profit organization, Promoting Access to Carbon Equity (PACE), which continues to develop poverty alleviating carbon trading projects in southern Africa under his management. His recent research has been focused on the links between economic growth, human poverty and environmental degradation. In this context he has explored South Africa’s green economy and climate change adaptation options and is a member of the City of Cape Town’s Climate Change Think Tank. In 2010 he took up a post at the University of Cape Town’s African Centre for Cities, where he is reading for a PhD.

Susan Parnell is an urban geographer in the Department of Environmental and Geographical Sciences and is the Director of the ‘CityLab’ at the University of Cape Town (UCT) African Centre for Cities. Prior to her appointment at UCT she taught in the Wits University Geography Department (Johannesburg) and the School of Oriental African Studies (London). She is the author of over 80 academic papers, 5 edited volumes and 2 co-authored books. She is on the Editorial boards of many specialist academic journals, including Urban Studies, Urban Affairs Review, Urban Forum and Transactions of the Institute of British Geographers.

Gregg Oelofse has a Masters Degree in Conservation Biology from the University of Cape Town. Since 1999 he has been the Head of Environmental Policy and Strategy at the City of Cape Town and developed the City’s first ever Environmental Policy as well as the City’s first Biodiversity and Coastal Management strategies. He was a founding member of the global Local Action for Biodiversity (LAB) initiative that works with over 40 cities on urban biodiversity issues. Prior to working for the City, he spent two years in Mali working as Environmental Coordinator for Anglo American’s gold mining activities.

Sarah Ward completed a Masters in Town and Regional Planning at the University of Natal, Durban, in 1986 after completing a BA and HDE at University of Cape Town. She has worked as a planner for the Cape Town City Council, London Boroughs and a housing NGO. Since 1993 Sarah has specialised in the energy sector, when her involvement in developing South Africa’s post-1994 National Energy Policy led to the conception of a sustainable energy programme for cities. Sarah managed this programme from a Cape Town based NGO, Sustainable Energy Africa, which led to the development of sustainable energy and climate change strategies across many South African cities and towns. She is the author of The Energy Book for urban development in South Africa (2002) and The New Energy Book (2008).

Climate Change at the City Scale: Impacts, Mitigation and Adaptation in Cape Town