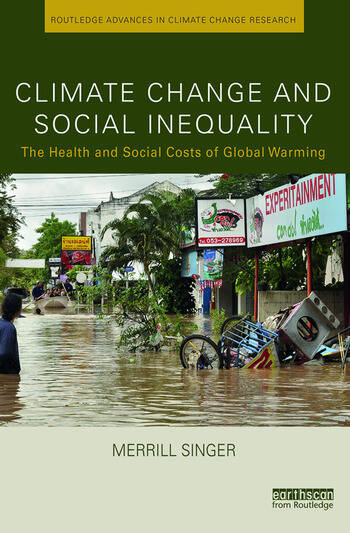 Climate Change and Social Inequality: The Health and Social Costs of Global Warming

The year 2016 was the hottest year on record and the third consecutive record-breaking year in planet temperatures. The following year was the hottest in a non-El Nino year. Of the seventeen hottest years ever recorded, sixteen have occurred since 2000, indicating the trend in climate change is toward an ever warmer Earth. However, climate change does not occur in a social vacuum; it reflects relations between social groups and forces us to contemplate the ways in which we think about and engage with the environment and each other.

Employing the experience-near anthropological lens to consider human social life in an environmental context, this book examines the fateful global intersection of ongoing climate change and widening social inequality. Over the course of the volume, Singer argues that the social and economic precarity of poorer populations and communities—from villagers to the urban disadvantaged in both the global North and global South—is exacerbated by climate change, putting some people at considerably enhanced risk compared to their wealthier counterparts. Moreover, the book adopts and supports the argument that the key driver of global climatic and environmental change is the global economy controlled primarily by the world’s upper class, which profits from a ceaseless engine of increased production for national middle classes who have been converted into constant consumers.

Drawing on case studies from Alaska, Ecuador, Bangladesh, Haiti and Mali, Climate Change and Social Inequality will be of great interest to students and scholars of climate change and climate science, environmental anthropology, medical ecology and the anthropology of global health.

1. The Physical and Social Dimensions of Climate Change

2. The Rise and Role of Social Inequality in the Production of Climate Change

3. Maintaining Inequality: Ideology of Denial and the Creation of Climate Change Uncertainty

4. The Polluting Elite and the Political Economy of Climate Change Denial

6. Changing World of the Indigenous Alaskan Yupik and Iñupiat Peoples

8. On the Bottom Rung of a Low Lying Nation: Social Ranking and Climate Change in Bangladesh

9. Haiti: A Legacy of Colonialism, a Future of Climate Change

Merrill Singer is Professor in the Departments of Anthropology and Community Medicine at the University of Connecticut, USA.

Climate Change and Social Inequality: The Health and Social Costs of Global Warming