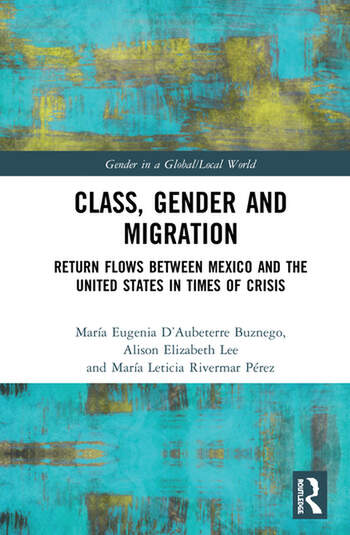 Class, Gender and Migration: Return Flows between Mexico and the United States in Times of Crisis

Using a gender-sensitive political economy approach, this book analyzes the emergence of new migration patterns between Central Mexico and the East Coast of the United States in the last decades of the twentieth century, and return migration during and after the global economic crisis of 2007.

Based on ethnographic research carried out over a decade, details of the lives of women and men from two rural communities reveal how neoliberal economic restructuring led to the deterioration of livelihoods starting in the 1980s. Similar restructuring processes in the United States opened up opportunities for Mexican workers to labor in U.S. industries that relied heavily on undocumented workers to sustain their profits and grow. When the Great Recession hit, in the context of increasingly restrictive immigration policies, some immigrants were more likely to return to Mexico than others. This longitudinal study demonstrates how the interconnections among class and gender are key to understanding who stayed and who returned to Mexico during and after the global economic crisis. Through these case studies, the authors comment more widely on how neoliberalism has affected the livelihoods and aspirations of the working classes.

This book will be of key interest to scholars, students and practitioners in migration studies, gender studies/politics, and more broadly to international relations, anthropology, development studies, and human geography.

3. Disarticulation of Agriculture, Transition to a Service Economy in the Sierra Norte of Puebla and Accelerated Migration to the Nuevo New South

4. "I was motivated to do everything": Undocumented ‘entrepreneurs of the self’ in New York

5. Deceleration of Migration and the Selectivity of Return Migration in the Northern Sierra of Puebla

6. "In Zapotitlán, we won’t have to pay for so many things": The Great Recession, Return Migration and Social Reproduction

is Professor of Anthropology in the Social Science and Humanities Institute of the Benemérita Universidad Autónoma de Puebla, Mexico.

is Associate Professor in the Department of Anthropology at the Universidad de las Américas Puebla, Mexico.

is Professor of Anthropology in the Social Science and Humanities Institute of the Benemérita Universidad Autónoma de Puebla, Mexico.

Class, Gender and Migration: Return Flows between Mexico and the United States in Times of Crisis