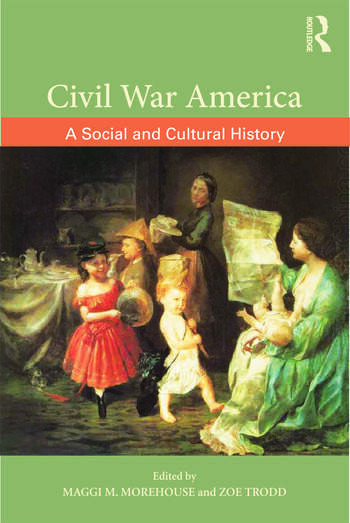 As war raged on the battlefields of the Civil War, men and women all over the nation continued their daily routines. They celebrated holidays, ran households, wrote letters, read newspapers, joined unions, attended plays, and graduated from high school and college. Civil War America reveals how Americans, both Northern and Southern, lived during the Civil War—the ways they worked, expressed themselves artistically, organized their family lives, treated illness, and worshipped.

Written by specialists, the chapters in this book cover the war’s impact on the economy, the role of the federal government, labor, welfare and reform efforts, the Indian nations, universities, healthcare and medicine, news coverage, photography, and a host of other topics that flesh out the lives of ordinary Americans who just happened to be living through the biggest conflict in American history. Along with the original material presented in the book chapters, the website accompanying the book is a treasure trove of primary sources, both textual and visual, keyed for each chapter topic.

Civil War America and its companion website uncover seismic shifts in the cultural and social landscape of the United States, providing the perfect addition to any course on the Civil War.

Part I: Dissent and Disobedience

Maggi M. Morehouse is Associate Professor of Southern History and Director of the Burroughs Fund for Southern Studies at Coastal Carolina University.

Zoe Trodd is Professor and Chair of American Literature in the Department of American and Canadian Studies at the University of Nottingham.