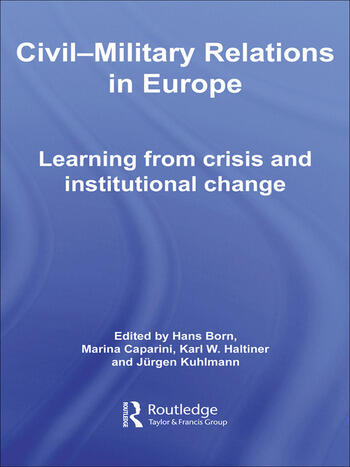 Civil-Military Relations in Europe: Learning from Crisis and Institutional Change

This new book illustrates how democracy cannot develop or endure unless military and security forces are under the full control of democratic institutions, and all the necessary safeguards, checks and balances are in place.

The contributors show how contemporary European states manage the following issue: how does a society, primarily through its legitimate, democratically elected political leaders and their appointed officials, control the military, that same state institution that has been established for its protection and wields the monopoly of legitimate force?

Twenty-eight case studies are selected from key countries: the Czech Republic, Germany, Georgia, France, Hungary, Ireland, Israel, Macedonia, Poland, Romania, Slovenia, Serbia and Montenegro, Switzerland, and the Ukraine. The key subjects of these cases vary from corruption to military incompetence, disobedience towards civilian superiors, to unauthorized strikes and accidents. The focus is on the relationship between political, civilian and military actors while identifying problems and dangers that can emerge in those relations to the detriment of effective and legitimate democratic control.

This is essential reading for students of civil-military relations, democratization, European politics and security studies in general.

Part 1. Introduction  1. Civilians and the Military in Europe  Part 2. Transition States  2. Stressed and Strained Civil-Military Relations in Romania, but Successfully Reforming  3. Differentia Specifica: Military Reform in Serbia and Montenegro  4. The Impact of Conflict and Corruption on Macedonia’s Civil Military Relations  5. Political Irresponsibility and Lack of Transparency in Ukrainian Defence Reform  6. Striving for Effective Parliamentary Control over the Armed Forces in Georgia  Part 3. Consolidating democracies  7. Problems Confronting Civilian Democratic Control in Poland   8. Civil-Military Relations in Hungary: From Competition to Cooperation  9. Executive Decisions and Divisions: Disputing Competences in Civil-Military Relations in Slovenia 10 Modernisation of the Czech Armed Forces: No Walk through a Rose Garden 11. The Eve of Statehood for Israel: a Battle for Civil Supremacy over the Military  Part 4. Established democracies  12. The Military Voice in France: On the Streets and in the Newspapers  13. Democratic Control of the Swiss Militia in Times of War and Peace: Ideal and Reality  14. International Prestige and Domestic Democratic Values in Civil-Military Conflicts: Two Irish Case Studies  15. His Master’s Voice? Freedom of Speech and the German Citizen in Uniform  Part V. Conclusions  Patterns of Democratic Governance of Civil-Military Relations

Civil-Military Relations in Europe: Learning from Crisis and Institutional Change