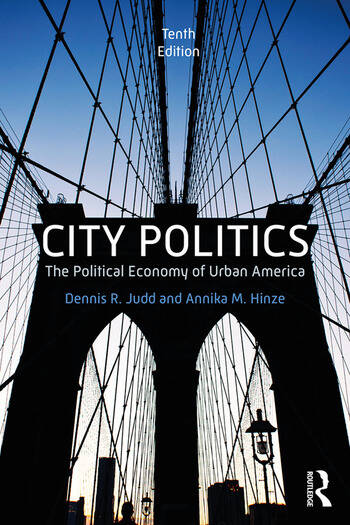 Praised for the clarity of its writing, careful research, and distinctive theme – that urban politics in the United States has evolved as a dynamic interaction between governmental power, private actors, and a politics of identity – City Politics remains a classic study of urban politics.  Its enduring appeal lies in its persuasive explanation, careful attention to historical detail, and accessible and elegant way of teaching the complexity and breadth of urban and regional politics which unfold at the intersection of spatial, cultural, economic, and policy dynamics.  Now in a thoroughly revised tenth edition, this comprehensive resource for undergraduate and graduate students, as well as well-established researchers in the discipline, retains the effective structure of past editions while offering important updates, including:

Taught on its own, or supplemented with the optional reader American Urban Politics in a Global Age for more advanced readers, City Politics remains the definitive text on urban politics – and how they have evolved in the US over time – for a new generation of students and researchers.

1. City Politics in America: An Introduction

Part 1. The Origins of American Urban Politics: The First Century

3. Party Machines and the Immigrants

5. Urban Voters and the Rise of a National Democratic Majority

Part 2. The Urban Crisis of the Twentieth Century

8. Federal Programs and the Divisive Politics of Race

9. The Rise of the Sunbelt

10. The Rise of the Fragmented Metropolis

13. The Renaissance of the Metropolitan Center

15. City and Metropolis in the Global Era

Dennis R. Judd is Professor and Acting Head of the Department of Political Science, College of Liberal Arts and Sciences at the University of Illinois, Chicago, USA.

is Assistant Professor of Political Science and Director of the Urban Studies Program at Fordham University, USA.

"As growing inequality continues to affect so many facets of American life and its citizenry, City Politics continues to be a necessary text for a broad audience interested in solutions to ingrained inequities."

"Judd and Hinze vividly capture the changing interplay of private power, public action, and group identity in the development of the nation’s cities and suburbs. This edition’s well-crafted chapters bring urban politics to life in ways that enable students as well as advanced readers to understand the past and to appreciate the complexity of current issues dividing America today."