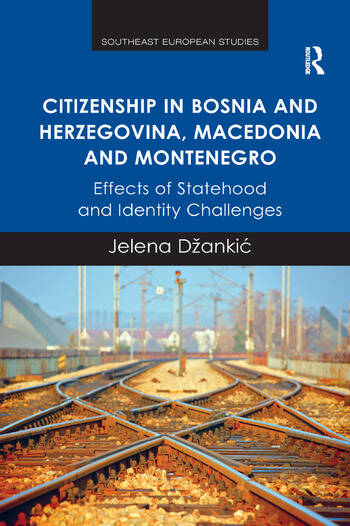 Citizenship in Bosnia and Herzegovina, Macedonia and Montenegro: Effects of Statehood and Identity Challenges

What happens to the citizen when states and nations come into being? How do the different ways in which states and nations exist define relations between individuals, groups, and the government? Are all citizens equal in their rights and duties in the newly established polity? Addressing these key questions in the contested and ethnically heterogeneous post-Yugoslav states of Bosnia and Herzegovina, Macedonia and Montenegro, this book reinterprets the place of citizenship in the disintegration of Yugoslavia and the creation of new states in the Western Balkans. Carefully analysing the interplay between competing ethnic identities and state-building projects, the author proposes a new analytical framework for studying continuities and discontinuities of citizenship in post-partition, post-conflict states. The book maintains that citizenship regimes in challenged states are shaped not only by the immediate political contexts that generated them, but also by their historical trajectories, societal environments in which they exist, as well as the transformative powers of international and European factors.

’Citizenship is an important dimension of any new state. Who is included and who is excluded is always important, but perhaps even more so in new states which are weak or unconsolidated. In this study, Dzanki brings expertise in South Eastern European politics and in the politics of citizenship to show us the extent to which state building projects and ethnic identities are interlinked, and how these linkages are exploited by political elites in order to strengthen their hold over the levers of power. This book will become an important part of the literature on the politics of the new states of South East Europe.’ Jo Shaw, University of Edinburgh, UK ’In multi-ethnic and unconsolidated states, citizenship can either unite or divide. In this important book Jelena Dzanki explains comprehensively how and why. Her systematic approach will serve as a model for comparative studies of citizenship beyond the Western Balkan cases examined.’ Rainer BaubÃ¶ck, European University Institute, Florence, Italy

Citizenship in Bosnia and Herzegovina, Macedonia and Montenegro: Effects of Statehood and Identity Challenges