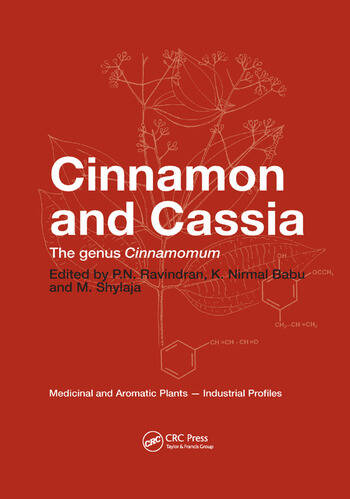 The introductory chapter depicts the history of these spices, followed by a detailed analysis of botany and crop improvement that examines taxonomy, morphology, embryology, reproduction, and propagation. A chapter on chemistry details the unique composition of cinnamon and cassia; it precedes an explanation of crop management, harvesting, and processing of Srilankan cinnamon.

This book points out that Vietnamese and Chinese cassia are the same, with differences only in harvesting and processing. It also includes chapters on Indian and Indonesian varieties of cassia, along with overviews of the camphor tree, and coverage of cinnamon and cassia pharmacology, toxicology, end uses, economics, and marketing. The volume concludes with an informative chapter on other economically useful species of Cinnamomum.

Written by a panel of experts from throughout Asia, this volume is the only comprehensive monograph on these spices, benefiting those engaged in study, cultivation, marketing, processing, and product development.