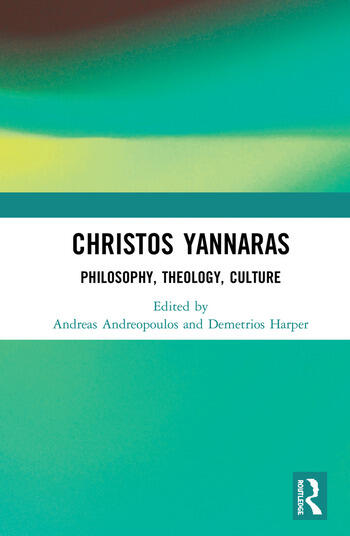 Christos Yannaras is one of the most significant Orthodox theologians of recent times. The work of Yannaras is virtually synonymous with a turn or renaissance of Orthodox philosophy and theology, initially within Greece, but as the present volume confirms, well beyond it. His work engages not only with issues of philosophy and theology, but also takes in wider questions of culture and politics.

With contributions from established and new scholars, the book is divided into three sections, which correspond to the main directions that Christos Yannaras has followed – philosophy, theology, and culture – and reflects on the ways in which Yannaras has engaged and influenced thought across these fields, in addition to themes including ecclesiology, tradition, identity, and ethics.

This volume facilitates the dialogue between the thought of Yannaras, which is expressed locally yet is relevant globally, and Western Christian thinkers. It will be of great interest to scholars of Orthodox and Eastern Christian theology and philosophy, as well as theology more widely.

Address by Archbishop Anastasios of Albania

2 Apophaticism and Phenomenology: Christos Yannaras in the Light of Jean-Luc Marion

4 On the ‘Patristic Grounding’ of Christos Yannaras’ ‘Prosopo-centric Ontology’: A Methodological Exploration

7 Wheat and Weeds: Ecclesia vs Religion in the Thought of Christos Yannaras

8 On the Early Development of Christos Yannaras’s Political Theology

9 Greek Theology after Christos Yannaras: Response to a Prophetic Call?

10 Christos Yannaras as a Teacher: Lineaments of a Distinctive Work

11 Orthodoxy and West in Modern Greece

12 Christos Yannaras and Manos Hadjidakis: between East and West

13 The ‘Ecclesiastical Event’: Modern Greece and its History, the World, and the other ‘Way of Being’

Andreas Andreopoulos is Reader in Orthodox Theology at the University of Winchester, UK, and an Orthodox priest. He has studied, worked, and taught in Greece, the USA, Canada and the UK. He has published several books and articles on Orthodox theology, iconography, and Christian symbolism, such as Gazing on God: Trinity, Church and Salvation in the Orthodox Church (James Clarke, 2013); The Sign of the Cross: The Gesture, the Mystery, the History (Paraclete Press, 2006); and Metamorphosis: The Transfiguration in Byzantine Theology and Iconography (SVS Press, 2005).

is currently a post-doctoral researcher at Aristotle University of Thessaloniki, Greece, a Visiting Research Fellow at the University of Winchester, UK, and an Orthodox priest. He serves as the assistant editor of Analogia: The Pemptousia Journal for Theological Studies. His research interests are varied but focus especially on philosophical theology, ethics, and patristics. He has authored several articles and book chapters on ethical and meta-ethical topics in philosophy and theology. His first monograph, The Analogy of Love: St Maximus the Confessor and the Foundations of Ethics, is forthcoming with St Vladimir’s Seminary Press.