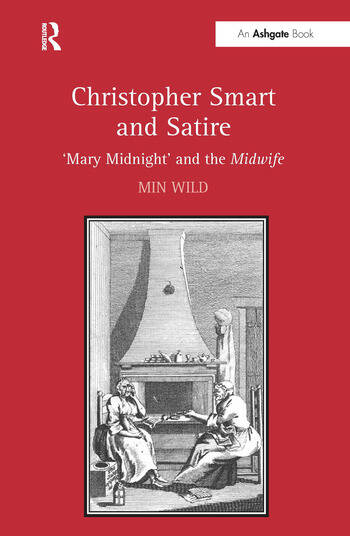 Christopher Smart and Satire: 'Mary Midnight' and the Midwife

Christopher Smart and Satire explores the lively and idiosyncratic world of satire in the eighteenth-century periodical, focusing on the way that writers adopted personae to engage with debates taking place during the British Enlightenment. Taking Christopher Smart's audacious and hitherto underexplored Midwife, or Old Woman's Magazine (1750-1753) as her primary source, Min Wild provides a rich examination of the prizewinning Cambridge poet's adoption of the bizarre, sardonic 'Mary Midnight' as his alter-ego. Her analysis provides insights into the difficult position in which eighteenth-century writers were placed, as ideas regarding the nature and functions of authorship were gradually being transformed. At the same time, Wild also demonstrates that Smart's use of 'Mary Midnight' is part of a tradition of learned wit, having an established history and characterized by identifiable satirical and rhetorical techniques. Wild's engagement with her exuberant source materials establishes the skill and ingenuity of Smart's often undervalued, multilayered prose satire. As she explores Smart's use of a peculiarly female voice, Wild offers us a picture of an ingenious and ribald wit whose satirical overview of society explores, overturns, and anatomises questions of gender, politics, and scientific and literary endeavors.

Contents: Introduction; Personal identity and personae in the 18th-century periodical; 'The jakes of genius': the nature of the Midwife; A 'terrible old lady': the persona of 'Mary Midnight'; 'A perfect Swiss in writing': literature and authorship in the Midwife; 'Inwardly working a stirre to the mynde': political satire in the Midwife; The 'kind juggler': social satire and enlightenment in the Midwife; Appendices; Bibliography; Index.

Min Wild is based in the Department of Humanities at the University of Exeter, UK.

'Min Wild's adroit and witty scholarship is a revelation. Her analysis of identity, satire, politics, and gender in The Midwife, Christopher Smart's explosive monthly magazine of 1750-53, makes for a compelling case study of commercial authorship and imaginative disruption in eighteenth-century print culture, and brilliantly dispels the assumption that journalism and satire stagnated after the fall of Walpole. Wild adds a major new dimension to our understanding of Smart: not only, as Donald Davie famously proposed, "the greatest English poet between Pope and Wordsworth", but also one of the most creative, and creatively subversive, journalists in the new age of periodical print'. Thomas Keymer, University of Toronto, Canada ’... perhaps the most intensive literary study of an eighteenth-century magazine ever undertaken ... This book illuminates an aspect of Smart that has only recently begun to attract sympathetic interest, but it is not for Smart scholars only. It contributes to the study of eighteenth-century satire more broadly than its title might suggest, and to the history of journalism. It is thoroughly informed by contemporary literary theory...’ Times Literary Supplement 'On the topic of authorship, Min's layered readings of the Midnight persona provide stimulating new insights into Smart's practice.... ...a noteworthy contribution to this debate...tells us more about the Midwife than we have ever known before...' SHARP News 'Clearly written and with its argument carefully plotted from chapter to chapter, it provides a straightforward and thoughtful read....Chapter 1...provides a good general orientation for the specific investigation into "Mary Midnight" and Christopher Smart that follows, and chapter 4...is of particular interest in relation to current scholarship on attribution of authorship,' Year's Work in English Studies '...Min Wild's book is an important event. As the first full-length study of Smart's exuberantly transgressive magazine The

Christopher Smart and Satire: 'Mary Midnight' and the Midwife