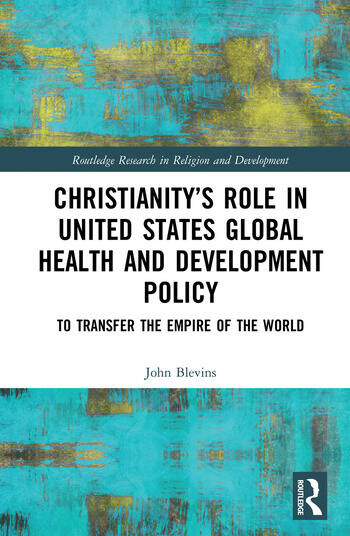 Christianity’s Role in United States Global Health and Development Policy: To Transfer the Empire of the World

In recent years, the role of religion in influencing international health policy and health services provision has been seen as increasingly important. This book provides a social history of the relationship between religion and America's international health policy and practice from the latter 19th century to the present. The book demonstrates that the fields of religion and public health have distinct moral frameworks, each with their own rationales, assumptions, and motivations. While these two frameworks share significant synergies, substantial tensions also exist, which are negotiated in political contexts.

This ambitious study of religion’s social history in the United States over the last 150 years will be of interest to researchers in global health, politics, religion and development studies.

1 The Religious Origins of America’s Relationship to the World

2 "Christianity is Adequate to the Work:" Religion and Social Reform in the Progressive Era

5 Blurring the Lines Between Evangelists, Engineers, and Reconstructionists

6 American Protestantism in the Cold War

7 No Longer on the Mainline: Other Christianities, Other Religions, and No Religion

8 Not "either/or" but "both/and": On Seeing International Health and Development as a Tragic Profession… and Why That Should Give Us Hope

John Blevins is an Associate Research Professor and Acting Director of the Interfaith Health Program at the Hubert Department of Global Health, Rollins School of Public Health, Emory University, USA

Christianity’s Role in United States Global Health and Development Policy: To Transfer the Empire of the World