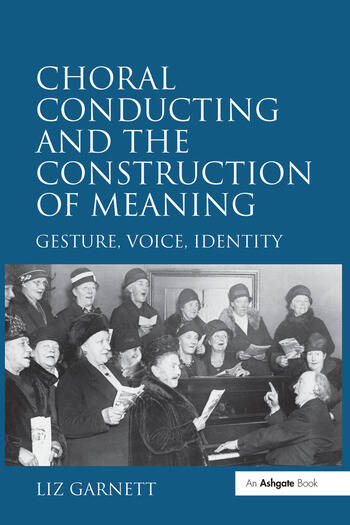 Choral Conducting and the Construction of Meaning: Gesture, Voice, Identity

It is a truism in teaching choral conducting that the director should look like s/he wishes the choir to sound. The conductor's physical demeanour has a direct effect on how the choir sings, at a level that is largely unconscious and involuntary. It is also a matter of simple observation that different choral traditions exhibit not only different styles of vocal production and delivery, but also different gestural vocabularies which are shared not only between conductors within that tradition, but also with the singers. It is as possible to distinguish a gospel choir from a barbershop chorus or a cathedral choir by visual cues alone as it is simply by listening. But how can these forms of physical communication be explained? Do they belong to a pre-cultural realm of primate social bonding, or do they rely on the context and conventions of a particular choral culture? Is body language an inherent part of musical performance styles, or does it come afterwards, in response to music? At a practical level, to what extent can a practitioner from one tradition mandate an approach as 'good practice', and to what extent can another refuse it on the grounds that 'we don't do it that way'? This book explores these questions at both theoretical and practical levels. It examines textual and ethnographic sources, and draws on theories from critical musicology and nonverbal communication studies to analyse them. By comparing a variety of choral traditions, it investigates the extent to which the connections between conductor demeanour and choral sound operate at a general level, and in what ways they are constructed within a specific idiom. Its findings will be of interest both to those engaged in the study of music as a cultural practice, and to practitioners involved in a choral conducting context that increasingly demands fluency in a variety of styles.

Dr Liz Garnett is a musicologist and choral clinician whose research and praxis both explore the theme of music and its social meanings. She has held academic posts at Colchester Institute and Birmingham Conservatoire, and is in demand internationally as a performance coach and arranger. Her first book, The British Barbershopper: A Study in Socio-Musical Values, is also published by Ashgate.

’... valuable for those interested in delving deeper into the study of conducting and the social and cultural issues that lead people to join the musical ensembles they do.’ Classical Music ’In this very well researched book, the relationship between conductor and choir is examined [...] from the perspective of gesture, meaning and across a variety of cultures.’ Singing

Choral Conducting and the Construction of Meaning: Gesture, Voice, Identity