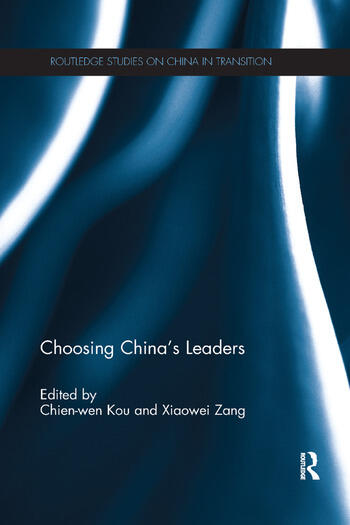 Political elites are a key topic in contemporary China studies, and have been investigated in relation to factional politics, generation politics, technocracy, and crucially, institutionalization. The institutionalization of elite replacement began in China in the 1980s and quickly accelerated after the early 1990s, as mechanisms emerged to regulate political elites’ entry and exit, including age limits, term limits, and step-by-step promotion.

By examining the various processes of elite selection, this book explores the role played by institutionalization in elite recruitment, promotion and turnover in China. While existing studies have developed our understanding of Chinese elite politics, two key puzzles regarding institutionalisation remain. Although institutionalisation is recognised as an important trend in Chinese politics, there is as yet no theoretical framework to explain the forces that have brought about and sustained this. Further, it is unclear how the process of institutionalisation has impacted on factional politics, and how factions would continue to operate within the parameters of formal politics. Drawing on a wide range of studies, this book looks at Politburo members, senior People’s Liberation Army officers, provincial leaders, heads of major central state-owned enterprises, and Youth League affiliates, to provide a comprehensive understanding of elite recruitment and mobility in contemporary China.

This book will be of great interests to students and scholars of Chinese politics and government, Chinese studies and Asian politics more broadly.

1. Introduction: Informal Politics Embedded in Institutional Contexts: Elite Politics in Contemporary China, Chien-Wen Kou and Xiaowei Zang 2. Entry into the Politburo of the CCP: A Qualitative Comparative Analysis of Institutionalization, Hsin-Hao Huang 3. The Roadmap of Upward Advancement for PLA Leaders, Ji You 4. Paths to the Top Leadership in China: The Case of Provincial Leaders, Zhiyue Bo 5. The Rule-Bound Personnel Turnover of China’s Provincial Leaders, 1993- 2010, S. Philip Hsu and Jhih-Wei Shao 6. Between the Hierarchy and the Market: Managerial Career Trajectories in China’s Energy Sector, Chih-Shian Liou and Chung-Min Tsai 7. The Rise of Youth League Affiliates and Their Paths to the Top, Chien-Wen Kou