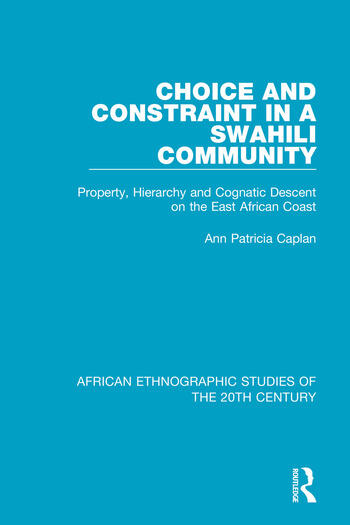 Choice and Constraint in a Swahili Community: Property, Hierarchy and Cognatic Descent on the East African Coast

Originally published in 1975, this book examines property and power relations in a Swahili village on Mafia Island off Tanzania. It focuses on the cognatic descent groups which are important in many areas of village life such as land-holding, marriage, residence, Islamic activities and spirit possession cults. Some anthropologiests have contended taht groups with multiple membership cannot be viable social units, but this book shows that such a system can actually work. In shwoing how the cognatic descent groups actually operate, both an ideology of descent group membership and also numerical material about patterns of choice are presented. This involves the construction of both mechanical and statistical models, as well as a decision model to discuss the constraints governing choices.

7. The Hierarchy and Village Politics

Choice and Constraint in a Swahili Community: Property, Hierarchy and Cognatic Descent on the East African Coast