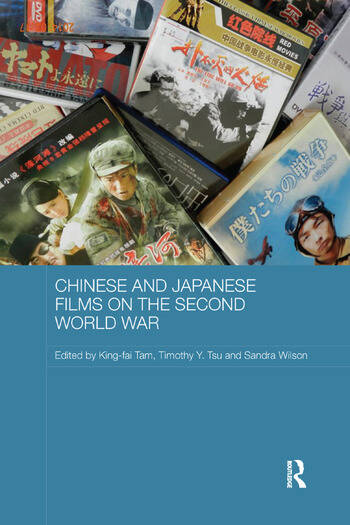 Chinese and Japanese Films on the Second World War

This book examines representations of the Second World War in postwar Chinese and Japanese cinema. Drawing on a wide range of scholarly disciplines, and analysing a wide range of films, it demonstrates the potential of war movies for understanding contemporary China and Japan. It shows how the war is remembered in both countries, including the demonisation of Japanese soldiers in postwar socialist-era Chinese movies, and the pervasive sense of victimhood in Japanese memories of the war. However, it also shows how some Chinese directors were experimenting with alternatives interpretations of the war from as early as the 1950s, and how, despite the "resurgence of nationalism" in japan since the 1980s, the production of Japanese movies critical of the war has continued.

1. The Second World War in Post-War Chinese and Japanese Film Timothy Y. Tsu, Sandra Wilson, King-fai Tam  2. A Genealogy of Anti-Japanese Protagonists in Chinese War Films, 1949-2011 Timothy Y. Tsu  3. Film, Ethnic Minorities, and the Anti-Japanese War: An Analysis of The Muslim Detachment and Jin Yuji Yanli Han, translated by Timothy Y. Tsu  4. The Sino-Japanese War in Ip Man: From Miscommunication to Poetic Combat Paola Voci  5. War, Horror and Trauma: Japanese Atrocities on Chinese Screens Kristof Van den Troost  6. Documentaries as Historical Text: the Emergence of the East River Column on the Hong Kong Television Screen King-fai Tam  7. The Theme of Salvation in Chinese and Japanese War Movies Siu Leung Li  8. Establishing the Genre of the Revisionist War Film: The Shin-Tōhō Body of Post-Occupation War Films in Japan Dick Stegewerns  9. Wild, Wild War: Okamoto Kihachi and the Politics of the Desperado Films Hiroshi Kitamura  10. Japan’s Longest Days: Tōhō and the Politics of War Memory, 1967-1972 Harald Salomon  11. The Himeyuri Film Cycle: Cultural Change and Remakes of an Okinawan Tragedy Christopher Ames  12. What is There to Laugh About? University of Laughs as an Anti-War Film Comedy Beng Choo Lim  13. A Past to be Ashamed or Proud of? Echoes of the Fifteen-Year War in Japanese Film Marco del Bene

King-fai Tam is an Associate Professor in the Department of Chinese Culture at Hong Kong Polytechnic University, Hong Kong, China.

Timothy Y. Tsu is a Professor in the School of International Studies at Kwansei Gaukuin University, Japan.

Sandra Wilson is a Professor in the School of Arts and a Fellow of the Asia Research Centre at Murdoch University, Australia.

Chinese and Japanese Films on the Second World War