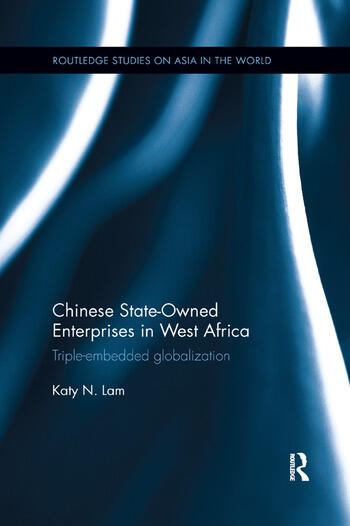 This book investigates the globalization process of Chinese state-owned enterprises (SOEs) in West Africa, primarily in Benin and Ghana, based on ethnographical studies. It challenges the dominant vision of "a powerful China in Africa", and argues that the so-called "Chinese business advantages" â€“ monolithic Chinese state and Chinese low cost advantages, are non-viable for sustaining Chinese business development in the continent. Considering the Chinese SOEs globalization process in a relational approach, this book examines how the triple embeddedness (Chinese, African and managerial) shapes the Chinese SOEs globalization process over time and space, in diverse dimensions and among different entities â€“ the Chinese state, Chinese SOEs, Chinese expatriates, the African government, African business partners, African staff, and the African society. It illustrates that the Chinese central state has "retreated" deliberately from its SOE globalization in Africa. The Chinese SOEs and Chinese expats are the major actors in initiating and inventing globalization strategies, facing limited Chinese state support and the African neopatrimonial governance and social contexts. Besides, the personal trajectories (from expatriation to social promotion) of Chinese SOE expats interweave with the globalization-turn-localization of their SOEs in Africa. Rejecting the linear, static and binary vision of "powerful China in powerless Africa", the present study thus emphasizes power dynamics in Chinese SOEsâ€™ globalization process are organic and pluralistic though in certain extent hierarchical â€“"second-class". Time and local relations are key elements constituting the real Chinese advantages for Chinese SOEs vis-a-vis their ultimate competitors â€“ not Western companies, but other Chinese companies.