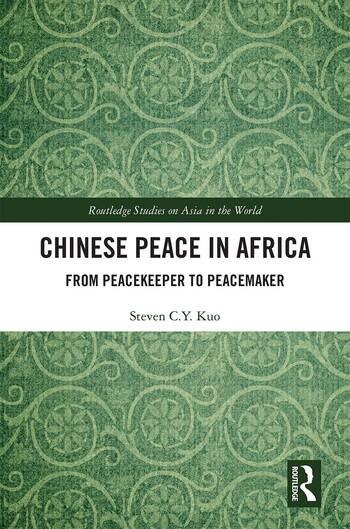 Chinese Peace in Africa: From Peacekeeper to Peacemaker

China’s emergence in Africa is the most significant development for the continent since at least the end of the Cold War. Of the permanent members of the UN Security Council, China is also the largest contributor in terms of troop numbers to United Nations Peacekeeping Operations (UNPKO). While China’s potential to be a force for change in Africa is undeniable, there are wildly varied and sometimes unrealistic expectations in both the West and Africa of China’s role in Africa. A more detailed and nuanced understanding of Chinese motivations in its African engagement is necessary, in order to work effectively with China for African peace, security and development.

With Liberia, Darfur and South Sudan as case studies, Kuo comprehensively examines the "Chinese peace" and places it within the context of the liberal peace debate. He does so using primary sources translated from the original Chinese, as well as interviews conducted in Mandarin with Chinese policymakers, academics, diplomats as well as Chinese company managers and businessmen working in Liberia and South Sudan. He also traces and analyses the Chinese discourse of peace, from traditional Chinese political philosophy, through Mao Zedong and Deng Xiaoping to post-reform and the Xi Jinping era.

Chapter 1 China’s Africa Security Policy as Struggle for Status: The Basic Discourses of a Great Power and a Third World Country

Chinese Peace in Africa: From Peacekeeper to Peacemaker