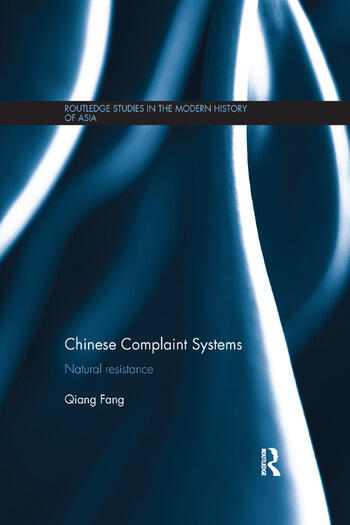 Complaint systems have existed in China for many years, and in 2004, a debate took place in the People’s Republic of China (PRC) over the Letters and Visits System (xinfang zhidu), which was designed to allow people to register complaints with the upper levels of the government. However, both parties generally overlooked several different complaint systems that had preceded the Letters and Visits System during China’s history. Indeed, despite the rich heritage of numerous complaint systems throughout China’s past, most studies of complaint systems in China have paid little attention to the origins, development, practices, impact, and nature of similar institutions in the longue durée of Chinese history.

Presenting a comprehensive study of complaint systems in Chinese history from early times to the present, this important book fills the gap in existing literature on complaint systems in China. Drawing on primary sources, Qiang Fang analyses the significance of continuities and changes in historical complaint systems for contemporary China, where the state continues to be nominally strong, but actually fragile. Unlike other major theories of popular resistance to the state in China, such as ‘everyday resistance’, ‘rightful resistance’ and resistance ‘as legal rights’, this book develops the theory that behind Chinese complaint systems, there was a mentality of ‘natural resistance’ that has been deeply embedded in Chinese culture, political philosophy, and folk religion for millennia. Given this history, Fang concludes that it is likely that some form of complaint system will continue to exist, and by helping to mitigate the increasing demands of the Chinese state on the Chinese, will serve to strengthen the state.

An essential contribution understanding the strengths, weaknesses, and various roles of the Letters and Visits System in contemporary China, as well as the systems that have preceded it throughout China’s long history, this book will be of huge interest to students and scholars of Chinese history, politics and law.

Qiang Fang is Associate Professor in the Department of History at the University of Minnesota Duluth, USA.