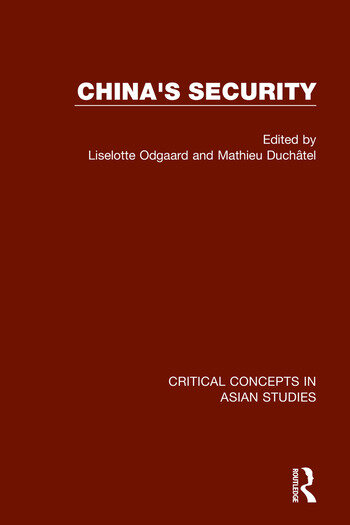 Chinese security has become a key focus after the Cold War. In just a few decades, China has gone from an obscure position as a closed communist developing country with little integration into international institutions over being designated a prospective strategic partner of the United States to being seen as Washington’s principal strategic opponent. Despite these vast changes in perspective on China’s international role and interests, China is still seen as an enigmatic security actor with hidden agendas and a vast chasm between Beijing’s official policies and strategic practices.

The great interest in Chinese security is reflected in the fact that it is hard to find a university program across the world which does not have this topic as part of their teaching and research agenda. Similarly, there is a vast literature on the topic that addresses Chinese security from a great variety of theoretical and empirical angles – including all schools of international relations, foreign policy analysis, strategic studies and also think-tank literature. This large body of academic research has not yet been compiled and analysed with the aim to identify the major works that have generated key debates in this young field of scholarly work on China security studies. A major works collection would make a significant contribution to shaping this young and growing field.

The existing literature, in its ambition to make sense of Chinese security strategic thinking and behaviour, focuses on understanding Chinese strategic intentions, power tools, instruments of influence and threat perceptions and which interests and world views they are based on. We include a diverse range of contributions from America, Australia, Europe and Japan to cover all major regional perspectives. We also include major theoretical approaches, such as realist and liberal approaches to Chinese security, English school contributions and constructivist analyses. Each volume will also include work written by Chinese scholars, including analysts in a policy-making role to cover the Chinese perspectives on Chinese security. The scholarly debates that help clarify and understand Chinese security strategies focus first on conceptual debates about similarities and differences between Chinese security strategic thinking compared to the thinking dominating Western tradition and practice. A second theme is China’s national security priorities in Asia and the nexus between China’s homeland security (terrorism and separatism) and international relations. A third theme is China’s approach to the management of international security affairs in the political, economic and military sector, as an emerging great power with increasingly global security interests. Finally, a fourth theme is the making of China’s national security policy, which involves analyses of the main institutions and actors and how they interact in a complex political system characterized by a relative lack of transparency.

China’s rise and the global order

US-China rivalry in Asia and Taiwan

China in the United Nations system

The future of non-interference

Liselotte Odgaard is an Associate Professor at the Royal Danish Defence College.

Mathieu Duchâtel is Senior Policy Fellow and Deputy Director of the Asia and China Programme at the European Council of Foreign Relations.