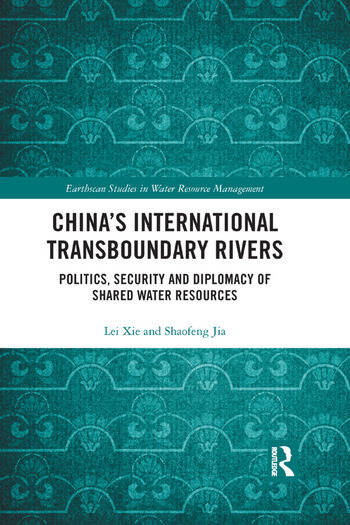 China has forty major transboundary watercourses with neighbouring countries, and has frequently been accused of harming its downstream neighbours through its domestic water management policies, such as the construction of dams for hydropower. This book provides an understanding of water security in Asia by investigating how shared water resources affect China’s relationships with neighbouring countries in South, East, Southeast and Central Asia.

This book investigates China’s policy responses to domestic water crises and examines China’s international water policy as well as its strategy in dealing with international cooperation. The authors describe the key elements of water diplomacy in Asia which demonstrate varying degrees of effectiveness of environmental agreements. It shows how China has established various institutional arrangements with neighbouring countries, primarily in the form of bilateral agreements over hydrological data exchange. Detailed case studies are included of the Mekong, Brahmaputra, Ili and Amur rivers.

Chapter 2 The governance of water resources in China

Shaofeng Jia is Deputy Director of the Center for Water Resources Research, CAS, Vice Chair of Special Committee for Water Resources, the Hydraulic Engineering Society of China，editorial board member of Water International, Geographic Research, Geographic Progress, and Journal of Economics of Water Resources.. His main interests include water resources management, integrated basin management and regional sustainable development, He has authored more than 100 papers and 5 books.

"Lei Xie and Shaofeng Jia’s book makes a robust contribution to the discussion of international fresh watercourses by combining the Chinese perspective on national interests with the Global South narrative of riparian neighbouring states, all of which are developing countries. Xie and Jia examine and link research areas such as human security, diplomacy, intergovernmental relations, and policies, and the authors contribute insights to the current debate on fresh water management in relation to sustainability and the reduction of tension and conflict." - Francisco José Leandro in China Information (2018)