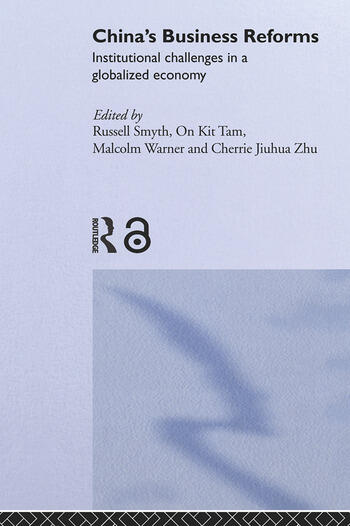 China's recent economic reforms have led to impressive growth, and an unprecedented enthusiasm for establishing foreign enterprises in China. Since 1993, China has been the second largest recipient of foreign direct investment in the world and is now considered to be the world's third biggest economy. Its greater economic integration with the rest of the world, especially since its accession to the World Trade Organisation (WTO), has further accelerated its market-oriented economic reforms. China is now opening its protected markets and beginning to submit to the rule of international law. This ongoing transition and increasing participation in the world economy has resulted in significant changes in human resource management and social welfare practices in China's enterprises. The book examines the key areas, all of which are linked, where China is grappling with institutional reforms as it opens up to the outside world: state-owned enterprise reform, capital markets and financial reform, human resources and labour market reform, social welfare reform, and China's accession to the WTO and the growth of the private sector.

List of Figures  List of Tables  List of Contributors  1. Institutional Challenges for China's Business Reforms in a Globalized Economy  2. Industrial Restructuring and Corporate Governance in China's Large-Scale State-Owned Enterprises  3. Regional Comparative Analysis of China's Banking System  4. Solving Agency Problems in a Cross-Border Environment  5. Foreign Banks - Market Entry and Foreign Investment  6. Accounting for Intangible Assets and the Relevance of Financial Statements in Developed and Emerging Capital Markets: Australia and China  7. Changing Structure of Chinese Enterprises and Human Resource Management Practices in China  8. The Management of Human Resources in Shanghai: A Case Study of Policy Responses to Employment and Unemployment in the People's Republic of China  9. Employee Perceptions of Social Protection Reform in Shanghai: Diversity Across Ownership Forms and Occupations  10. Pension Reform in China: Imperatives, Constraints and Outcomes  11. Globalization and Occupational Health and Safety Regulation in China  12. China's Entry to the WTO: Effects of Reducing Tariff and Non-Tariff Barriers and Endogenous Productivity Growth  13. Raw Entrepreneurship and the Rise of the New Private Sector in Western China: The Hope Group of Chengdu, Sichuan Province  Bibliography  Index

Russell Smyth is Professor of Economics and Director of the Asian Business and Economics Research Unit, Monash University. He has Honours degrees in Economics and Law from Monash University and a PhD in Economis from the University of London. His research interests include Chinese economic reform, law and economics and applied time series econometrics. He has published widely in these areas. He is Editor of Economic Papers, the policy journal of the Economic Society of Australia and Associate Editor of Asia Pacific Law and Economics Review.
On Kit Tam is Professor and Associate Dean International, Faculty of Business and Economics, Monash University. He is Co-Director of the Monash Governance Research Unit, and Director of China Research Center, Monash Asia Institute. His research interest is in corporate governance, China's economic reform, financial development and foreign investment policy.
Malcolm Warner is Professor and Fellow, Wolfson College and Senior Research Associate, Judge Institute of Management, University of Cambridge. He has written extensively on management and is the Editor-in Chief of the International Encyclopedia of Business and Management. He is also Co-Editor of the Asia Pacific Business Review and is on the editorial boards of many international journals.
Cherrie Jiuhua Zhu is Associate Professor and Director of the China Program in the Faculty of Business and Economics, Monash University. She has published in papers in the areas of human resource management and international management. Her current research interests are globalization, marketization, social protection reform and their impact on management in China.