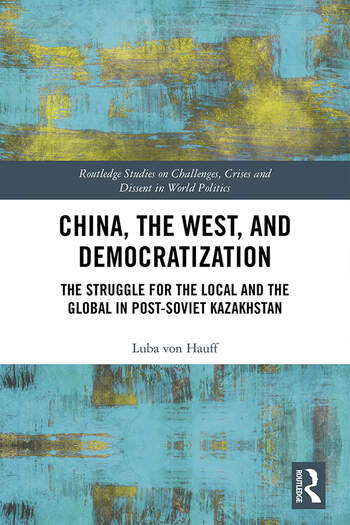 China, the West, and Democratization: The Struggle for the Local and the Global in Post-Soviet Kazakhstan

Drawing upon insights from international socialization theory and social psychology, this book examines China’s efforts to multipolarize – and hence potentially de-liberalize – the international system from the local perspective of a non-democratic (yet democratizing) nation and then applies these insights to Beijing’s current global agency in the context of the Belt and Road Initiative.

Specifically, the book scrutinizes Beijing’s normative engagement in Kazakhstan, a nation that evolved from an enthusiastic supporter of the West’s normative domination of international affairs into an overt critic – after having institutionalized relations with Beijing through the Shanghai Cooperation Organization. Tracing and juxtaposing the respective patterns of Kazakhstan’s political identity development before the SCO entered the region and after, this book not only yields unexpected conclusions about the quality of post-Soviet democratization outcomes, but also about Beijing’s local and global influence potentiality for the time to come – and its limits.

This book will be of key interest to scholars and students of China’s normative power, democratization studies, post-Soviet studies, and International Relations.

Introduction: Democracy and the Local-Global Nexus of Global Dominance

1. Political Systems and International Relations after the Cold War

2. Localizing the International: On Similar Pathways and Variant Outcomes of Socialization in IR

5. The ‘Kazakh Way’: A Chinese Construct?

Conclusion: Democracy and the Local-Global Nexus of Global Dominance in a Multipolar World

China, the West, and Democratization: The Struggle for the Local and the Global in Post-Soviet Kazakhstan