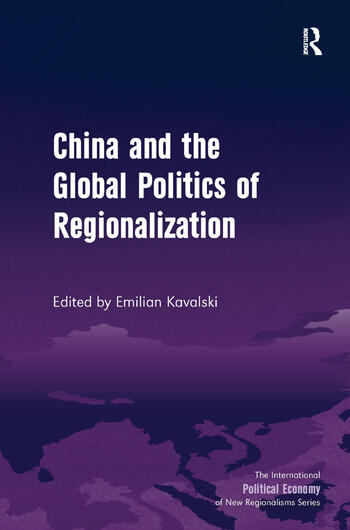 China and the Global Politics of Regionalization

This volume examines the prominent role of China in global politics and the relevance of the 'new regionalism' paradigm to China's international outreach. It provides a comprehensive and critical assessment of China's impact on the global politics of regionalization, offers a novel application of analytical models, investigates the aspects of the Chinese practice of regionalization that set it apart, and demonstrates China's transformative potential in international life. Addressing the need to 're-Orient' the research and policy agenda of international relations, this comprehensive study demonstrates both the lack of language to engage with existing norms and standards and the difficulty of applying them to an evaluation of the global politics of China's 'non-Western' international agency.

Emilian Kavalski is Associate Professor of Global Studies at the Institute for Social Justice, Australian Catholic University (Sydney). He is currently working on (i) the encounter of International Relations with life in the Anthropocene, especially the conceptualization of and engagement with non-human actors; and (ii) the nascent Asian normative orders and the ways in which they confront, compliment, and transform established traditions, norms, and institutions. Emilian contends that in both these areas the application of Complexity Thinking has important implications for the way global life is approached, explained, and understood. At the same time, these research foci sketch a prolegomenon to the conceptual contexts of theory-building and policy-making intent on facilitating economic, social, and environmental interactions that promote the well-being of people in ways that are just, equitable, and sustainable.

’The book gives a breath of fresh air in theory building and in empirical analysis of China’s regional behaviour around the world. It suggests that China not only socializes itself into the existing regional norms and rules, but also socializes other countries into China’s practice - Do as China does! A stimulating read.’ Gerald Chan, University of Auckland, New Zealand 'This volume does more than simply review Beijing’s policies, it explains the complexity and contradictions inherent in China’s understanding of regional diplomacy. The authors expertly show how China’s regional efforts differ from patterns established by Western nations. Anyone interested in the impact of China’s growing economic power, military capability, and diplomatic clout will benefit from this unique volume.' Steven Phillips, Towson University, USA 'China’s astonishing economic growth has long featured in international news agendas, as have issues related to climate change and the environment. Kavalski’s collection addresses an equally important, but often overlooked phenomenon: China’s unique approach to global politics. The range of contributors is impressive, with perspectives from different continents and disciplines.' Alan Hunter, Coventry University, UK 'We talk incessantly about the Internet and the global integration of finance, trade and even security. But what if it’s not all coming together? Here is a prescient book that explores a parallel political universe - a "globalization" with China at the center.' William W. Keller, University of Pittsburgh, USA 'Overall, this volume is a good source for scholars, students as well as policy makers, who seek a deeper understanding of the current global politics of regionalisation and the role of China in it. It is also essential reading for those who are interested in the application of analytical models of regionalism and regionalisation in a non-Western case other than the Association of Southeast

China and the Global Politics of Regionalization