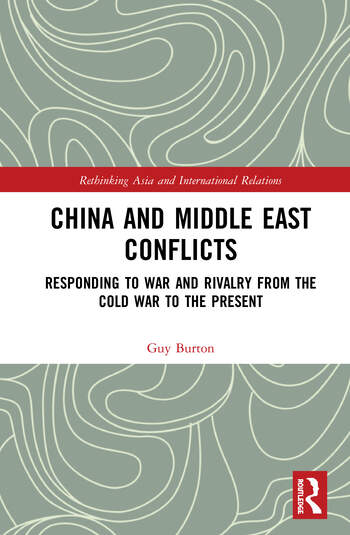 China and Middle East Conflicts: Responding to War and Rivalry from the Cold War to the Present

How do aspiring and established rising global powers respond to conflict? Using China, the book studies its response to wars and rivalries in the Middle East from the Cold War to the present.

Since the People’s Republic was established in 1949, China has long been involved in the Middle East and its conflicts, from exploiting or avoiding them to their management, containment or resolution. Using a conflict and peace studies angle, Burton adopts a broad perspective on Chinese engagement by looking at its involvement in the region’s conflicts including Israel/Palestine, Iraq before and after 2003, Sudan and the Darfur crisis, the Iranian nuclear deal, the Gulf crisis and the wars in Syria, Libya and Yemen. The book reveals how a rising global and non-Western power handles the challenges associated with both violent and non-violent conflict and the differences between limiting and reducing violence alongside other ways to eliminate the causes of conflict and grievance.

Chapter 2 – Conflict and its Management

Chapter 3 – China, Algeria and Egypt: The War of Independence and the Suez Crisis to Camp David

Chapter 4 – China and the Palestinian Liberation Organisation: From People’s War to the Algiers Declaration, 1967-1988

Chapter 5 – China, the Horn of Africa and the Arabian Peninsula: From Militancy to Diplomacy during the Cold War

Chapter 6 – China and the Iran-Iraq War

Chapter 7 – China and Iraq: The Gulf Wars and the War against ISIS

Chapter 8 – China and the Palestinian-Israeli Conflict since Oslo

Chapter 9 – China and the Darfur Crisis in Sudan

Chapter 10 – China and Libya: From Gaddafi to the Uprising and After

Chapter 14 – China and the Gulf Crisis

Guy Burton is Adjunct Professor at Vesalius College, Brussels. He has previously held research and teaching appointments at the Mohammed Bin Rashid School of Government in Dubai, Nottingham University’s Malaysian campus, the University of Kurdistan-Hewler in northern Iraq and Birzeit University in occupied Palestine. His research interests concern the role of rising powers, conflict management and the politics and international relations of the Middle East. He is the author of Rising Powers and the Arab-Israeli Conflict since 1947 (2018).

China and Middle East Conflicts: Responding to War and Rivalry from the Cold War to the Present