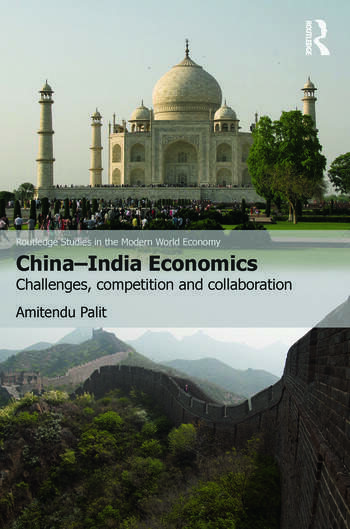 A review of the existing literature on the China-India comparative theme conveys the distinct impression that the literature largely projects China and India as intrinsically competitive entities. While much has been written on where and why China and India are contesting, particularly from a political sense, very little attention has been devoted to mutual collaboration, whether existing or potential. Such possibilities are at their greatest in economics, which will dominate the future China-India relationship.

This book explores Sino-Indian ties from a comparative economic perspective and argues that it is erroneous to visualise the ties either from exclusively competitive or collaborative perspectives. The future relationship between the two countries will be characterised simultaneously by two ‘C’s: competition and collaboration, which are both linked to common challenges facing them. Arguing that while competition in the economic sphere is inevitable, given their size and aspirations, the book contends that negative externalities from competition will encourage both countries to collaborate and expand the scope of such collaboration. The book's refreshing angle makes it a must-read for those interested in Sino-Indian relationship.

Amitendu Palit is an economist specialising in development, international trade and political economy. His research interests are China-India comparative economic dimensions, Asia’s trade policies, and political economy of land markets, environment and demography. He worked for several ministries in India, particularly Ministry of Finance, where he spent a decade. He has several academic publications to his credit. His first book (co-authored) on Special Economic Zones in India: Myths and Realities was published in 2008. A columnist for India’s Financial Express, Dr Palit writes for China Daily, Wall Street Journal, Business Times and several other leading global publications. He features regularly on Channel News Asia, CNBC, Doordarshan (India), Bloomberg and other television channels. He is married to Dr Parama Sinha Palit and is currently based in Singapore as Head (Development & Programmes) and Visiting Senior Research Fellow at the Institute of South Asian Studies in the National University of Singapore (NUS).

'As Asia’s giants, China and India, re-emerge managing their peaceful rise would pose the greatest challenge for each of them as well as for all their Asian neighbours. Amitendu Palit’s book is a valuable contribution to the vast literature on the challenges China and India face as they compete and collaborate.'

'Palit hardly ever uses rhetorical flourish on any issue preferring to shower the subject with details. Since India and China intend to do business for a long time with each other, this is a most handy reference manual to prise out clear information on the trajectories of the two nations.'

'In this sophisticated and scholarly analysis, Dr Palit told us that China-India relations are much more complicated than the media has described, and exclusively competitive or collaborative perspective could be wrong. This book will certainly enlighten policy makers and researchers when they come to China-India relations.'

‘A valuable study of a juxtaposed China and India’