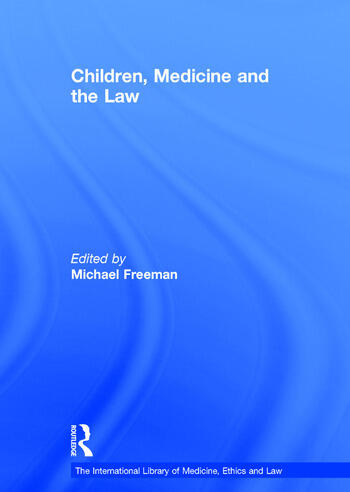 Children, Medicine and the Law

Selected for inclusion in this volume are the most significant and influential articles analyzing the key issues surrounding children, medicine and the law today. Issues examined include: the implications of assisted reproduction for children, neonatal intensive care, health care, HIV testing of new-born children, choosing sexual orientation and adolescents and life-and-death decisions.

Michael Freeman is Professor of English Law at University College London. His research interests are in cultural pluralism in particular in relation to the rights of children and in medical ethics particularly in relation to medically assisted reproduction.He has published in the areas of Family Law, Child Law and Policy, Children's Rights, Medicine, Ethics and the Law and Medical Law, Jurisprudence and Legal Theory. He is the author of over 40 books, editor of a large number of international journals and a Fellow of the British Academy.

'...a welcome contribution...shines light on many of the ethical dilemmas that arise when treating children.' The Journal of Legal Medicine

Children, Medicine and the Law