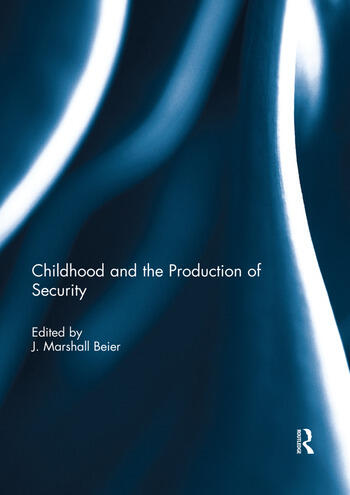 Childhood and the Production of Security

Responding to security scholars’ puzzling dearth of attention to children and childhoods, the contributors to this volume reveal the ways in which they not only are already present in security discourses but are actually indispensable to them and to the political projects they make possible. From zones of conflict to everyday life contexts in the (post)industrial Global North, dominant ideas about childhood work to regulate the constitution of political subjects whilst variously enabling and foreclosing a wide range of political possibilities. Whether on the battlefields of Syria, in the halls of the UN, or the conceptual musings of disciplinary Security Studies, claims about or ostensibly on behalf of children are ubiquitous. Recognizing children as engaged political subjects, however, challenges us to bring a sustained critical gaze to the discursive and semiotic deployments of children and childhood in projects not of their making as well as to the ways in which power circulates through and around them. This book was originally published as a special issue of Critical Studies on Security.

2. ‘Children and armed conflict’ and the field of security studies
Cecilia Jacob

4. Resilience is its own resistance: the place of children in post-conflict settlement
Alison M. S. Watson

6. Telling geopolitical tales: temporality, rationality, and the ‘childish’ in the ongoing war for the Falklands-Malvinas Islands
Victoria M. Basham

J. Marshall Beier is Associate Professor in the Department of Political Science at McMaster University. His teaching and research centers on issues of political subjecthood with regard to childhood, indigeneity, and the discursive/semiotic production of security more broadly. His recent publications include The Militarization of Childhood: Thinking Beyond the Global South (2011), Canadian Foreign Policy in Critical Perspective (2010), Indigenous Diplomacies (2009) and International Relations in Uncommon Places: Indigeneity, Cosmology, and the Limits of International Theory (2005).

Childhood and the Production of Security