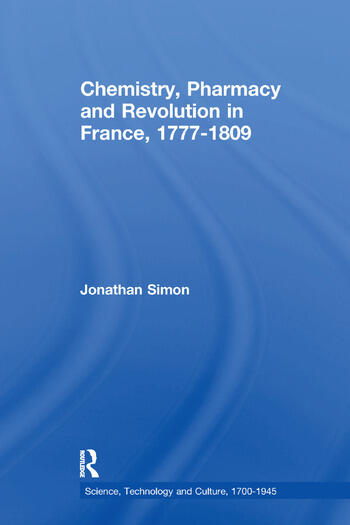 This book explores the history of pharmacy in France and its relationship to the discipline of chemistry as it emerged at the beginning of the nineteenth century. It argues that an appreciation of the history of pharmacy is essential to a full understanding of the constitution of modern science, in particular the discipline of chemistry. As such, it provides a novel interpretation of the chemical revolution (c.1770-1789) that will, no doubt, generate much debate on the place of the chemical arts in this story, a question that has hitherto lacked sufficient scholarly reflection. Furthermore, the book situates this analysis within the broader context of the French Revolution, arguing that an intimate and direct link can be drawn between the political upheavals and our vision of the chemical revolution. The story of the chemical revolution has usually been told by focusing on the small group of French chemists who championed Lavoisier's oxygen theory, or else his opponents. Such a perspective emphasises competing theories and interpretations of critical experiments, but neglects the challenging issue of who could be understood as practising chemistry in the eighteenth century. In contrast, this study traces the tradition of pharmacy as a professional pursuit that relied on chemical techniques to prepare medicines, and shows how one of the central elements of the chemical revolution was the more or less conscious disassociation of the new chemistry from this ancient chemical art.

'This is a thoughtful and well-written book that deserves to find a place on the shelves of all serious historians of pharmacy, and particularly those with an interest in the history of pharmacy in France.' Pharmaceutical Historian 'Overall this is a serious and bold book that offers sophisticated arguments supported by meticulous research.' Pharmacy in History '... this book is highly recommended reading.' Bulletin for the History of Chemistry 'This volume breaks new ground in the historiography of eighteenth- and early nineteenth-century French chemistry. Simon's innovative disciplinary approach and his multilevel analysis (theoretical, social, institutional) offer a new perspective on some long-standing questions concerning the Chemical Revolution.' Isis ’...Simon adds substantially to our understanding of the development of pharmacy in France and displays a commendable mastery of his material.’ Archives Internationales d'Histoire des Sciences ’The principal merit of Simon's book, and it is a great one, is to call attention to the importance and relative neglect of the history of pharmacy and to repair that neglect in considerable measure.’ Medical History ’There is much to be grateful for here: a strongly articulated argument, elegantly and rigorously presented, and many shrewd observations on particular institutions, careers, and texts. Simon also deserves credit for his effort to bring his chosen topic into the mainstream of the history of science... It is an indication of the richness of Simon's contribution that it points to so many more issues and questions than any one monograph could address. We can expect to see it frequently cited in the literature on the history of science and other fields.’ Metascience ’By paying more attention to the work practices of chemists and pharmacists, Simon’s book opens new perspectives for the historiography of chemistry.’ Ambix